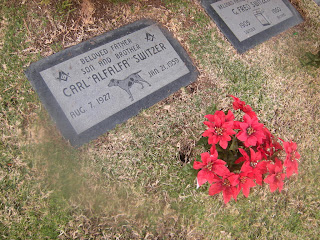 Wednesday, January 11, 2012, I spent the afternoon searching for some obscure graves at Hollywood Forever Cemetery. But Carl "Alfalfa" Switzer's grave is not one of them. His grave is easy to find. It's near the curb in the Garden of Memory (formerly Section 6), grave 6, lot 26. 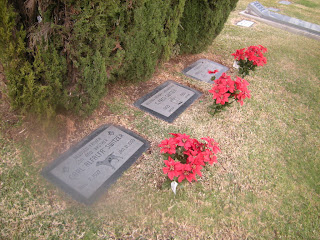 I was pleasantly surprised to see holiday flowers on the graves of him and his family, so I decided to take some new photos. I wonder who left the flowers? Could it be one of the other L.A. Gravers who frequent the cemetery? Does he have any living relatives or friends? How very nice! 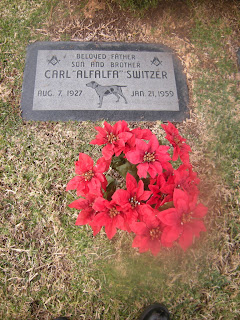 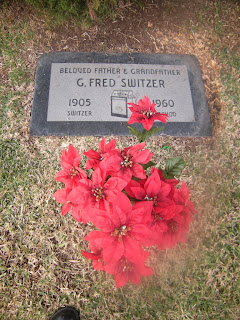 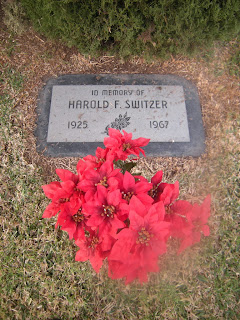 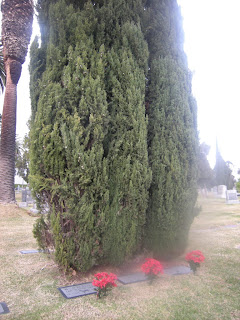 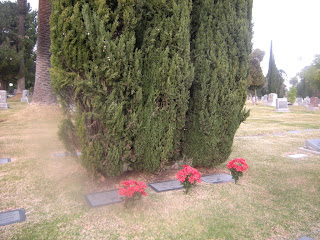 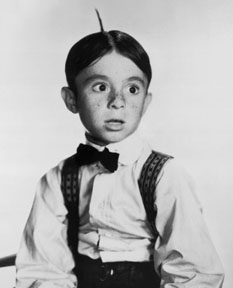 The Girl in the Red Velvet Swing (1955) Full Movie

The Girl in the Velvet Swing (1955) is a film directed by Richard Fleischer from a screenplay by Walter Reisch and Charles Brackett, and starring Joan Collins, Ray Milland and Farley Granger. The film was released by Twentieth Century-Fox, which had originally planned to put Marilyn Monroe in the title role, and then suspended her when she refused to do the film.

It is the fictionalized story of Evelyn Nesbit, a model and actress, and the widely publicized scandal surrounding the murder of her former lover, architect Stanford White, by her current husband, rail and coal tycoon Harry Kendall Thaw. Nesbit served as a technical adviser on the film.


Emile Meyer as Hunchbacher
at 3:45 PM No comments:


Legendary Hollywood gadabout, Samson De Brier interviewed by "American Eve" author Paula Uruburu in his Hollywood home in 1995. He remembers Evelyn Nesbit and other celebrity notables.
at 3:35 PM No comments:

Evelyn Nesbit, the American Eve
at 3:30 PM No comments:


Unsolved Mysteries cover the life and death of Elizabeth Short, the "Black Dahlia."


"Mysteries and Scandals" explores the murder of the "Black Dahlia."


In this episode William Conrad and Parley "Mayor Stoner" Baer share their memories of Mayberry's favorite barber, Howard McNear.
at 3:00 PM No comments: 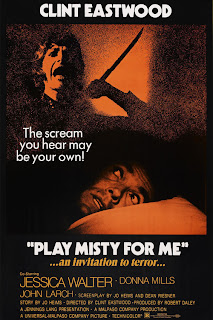 Play Misty for Me is a 1971 American psychological thriller film, directed by and starring Clint Eastwood, in his directorial debut. Jessica Walter and Donna Mills co-star. The original music score was composed by Dee Barton.

Dave Garver (Clint Eastwood) is a KRML radio disc jockey who nightly broadcasts from his studio in Carmel-by-the-Sea, California. He has a fling with — and then is stalked by — Evelyn Draper (Jessica Walter), an obsessed female fan, while attempting to patch up his shaky relationship with his girlfriend, Tobie Williams (Donna Mills).

Draper has a habit of phoning in to Garver's radio show and asking him to play the classic Erroll Garner ballad "Misty" (lyrics "Look at me, I'm as helpless as a kitten up a tree..."). She hears on Garver's radio show that he goes to a specific bar each night, so she shows up there and, at first, makes their meeting appear as a coincidence. He drives her home and, despite a few comments in opposition, Draper convinces him to sleep with her.

From that point on, Draper begins showing up at Garver's house uninvited. She flares with jealous rages, makes a suicide attempt in Dave's home, and irretrievably destroys his carefully constructed career move into management.

Just when he believes Draper might be out of his life forever, she becomes Tobie's new roommate under a false name. This results in a final confrontation between Garver and his psychopathic fan.

(this is the full movie, but the credits are reversed)

Before Malpaso Productions co-founder Irving Leonard died, he and Eastwood discussed a final film, one giving Eastwood the artistic control he desired by making his directorial debut. The film was Play Misty for Me. Eastwood reflected on his new role:

"After seventeen years of bouncing my head against the wall, hanging around sets, maybe influencing certain camera set-ups with my own opinions, watching actors go through all kinds of hell without any help, and working with both good directors and bad ones, I'm at the point where I'm ready to make my own pictures. I stored away all the mistakes I made and saved up all the good things I learned, and now I know enough to control my own projects and get what I want out of actors." –Clint Eastwood[3]

The script was originally conceived by Jo Heims, a former model and dancer turned secretary, and was polished by Dean Riesner.[4] The idea of another lover's interest, with a level-headed girlfriend Tobie added to the plot, was a suggestion by Sonia Chernus, an editor who had been with Eastwood when he was initially spotted for Rawhide.[5]

The film paved the way for many later stalker films (such as Fatal Attraction), particularly those with a psychotic female antagonist, and also those where the villain made an unexpected return.

The story-line was originally set in Los Angeles, but under Eastwood's insistence, the film was shot in the more comfortable surroundings of the actual Carmel-by-the-Sea, California, where he could shoot scenes at the local radio station, bars, and restaurants and at friends' houses.[5] Eastwood has also long made Carmel his home, and was elected mayor there in 1986. Filming commenced in Monterey, California in September 1970, and although this was Eastwood's debut as film director, Siegel stood by to help. Also, frequent collaborators of Siegel's, such as cinematographer Bruce Surtees, editor Carl Pingitore, and composer Dee Barton, made up part of the filming team.[1] Additional scenes were shot at the Monterey Jazz Festival in September 1970, featuring jazz greats Johnny Otis, Cannonball Adderley, and future Weather Report founder Joe Zawinul. (The commentator mentions: "That was the Cannonball Adderley group. They are playing at the Monterey Jazz Festival with Duke Ellington, Woody Herman, Joe Williams and many others. Now we are gonna hear from 'The Gator Creek Organization' and 'Feeling Fine'...".) "The Sardine Factory" is a real restaurant and bar still at the same location as in the film, at Prescott and Wave Street, just one block up from Cannery Row in Monterey. The radio station, KRML, was a real-life jazz station in Carmel, whose studios were relocated to the Eastwood Building at San Carlos and 5th, in the same building as the Hog's Breath Inn (a restaurant that Eastwood once owned). After a brief dark period in 2010, the radio station returned to the air in 2011.

The rights to the song "Misty" were obtained after Eastwood saw Garner at the Concord Music Festival in 1970, and he later paid $2,000 for the use of the song "The First Time Ever I Saw Your Face" by Roberta Flack.[1] Meticulous planning and efficient directorship by Eastwood saw the film fall nearly $50,000 short of its $1 million budget, and the film was completed four or five days ahead of schedule.[1] 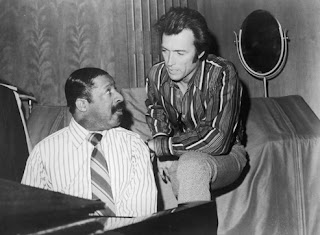 
The film features a romantic montage (views of Garver and Tobie peacefully roaming on the sea-side and lying down in the woods), backed by Roberta Flack's recording of "The First Time Ever I Saw Your Face", a Ewan MacColl torch song. Roberta Flack's version of the song (after staying at #1 for five weeks during the spring) became the 1972 Billboard Hot 100 number-one single of the year. The film title is also featured on a movie marquee in the beginning sequence of another 1971 Clint Eastwood movie, Dirty Harry.

Rissient successfully arranged for Play Misty for Me to premiere in October 1971. The film was shown at the San Francisco Film Festival and was widely released in November.[6]

Play Misty For Me was a financial success, earning over $5 million.[2]

The film has been given mostly positive reviews, with an 83% "fresh" rating on Rotten Tomatoes.[7] In his 1971 review of the film, Roger Ebert[8] wrote, "Play Misty for Me is not the artistic equal of Psycho, but in the business of collecting an audience into the palm of its hand and then squeezing hard, it is supreme." Critics such as Jay Cocks in Time, Andrew Sarris in the Village Voice, and Archer Winsten in the New York Post all praised Eastwood's directorial skills and the film, including his performance in the scenes with Walter.[6]

Jessica Walter was nominated for a 1972 Golden Globe for best actress (dramatic leading role category), but it was Jane Fonda who received the award, for her part in the film Klute. Play Misty for Me was number 26 on Bravo!'s "30 Even Scarier Movie Moments." 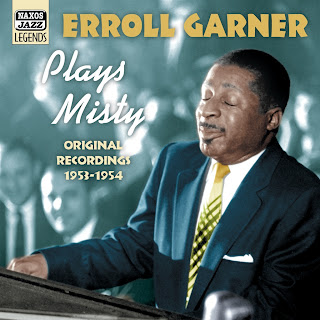 "Misty" is a jazz standard written in 1954 by the pianist Erroll Garner.


Originally composed as an instrumental following the traditional 32-bar format, the tune later had lyrics by Johnny Burke and became the signature song of Johnny Mathis, reaching #12 on the U.S. Pop Singles chart in 1959. It has been covered numerous times, perhaps most notably by Ella Fitzgerald, Sarah Vaughan (1959), Billy Eckstine (1960), Frank Sinatra and Earl Grant (1961), Lloyd Price (1963), and also by Ray Stevens (1975) as a country song. Lesley Gore included a version of the song on her debut album, I'll Cry If I Want To.[1] Joni James recorded a version of "Misty" accompanied by acoustic guitar on her 1963 album, Like 3 O'Clock in the Morning. A version was also recorded by Julie London and an instrumental version by The Shadows.

The song plays a key role in the plot of the movie Play Misty for Me (1971). Clint Eastwood and Universal paid $25,000 to use the song in the film.


In an infamous scene from the twentieth episode of the fifth season [3] of Magnum, P.I., Tom Selleck, as Magnum, is forced to sing the first few lines of the song (before being mercifully interrupted by gunfire) in a karaoke bar, in what has become notorious as one of the worst renditions of the song ever committed to film.

In 1993, guitarist Larry Coryell covered the song from his album "Fallen Angel."[4]

Clay Aiken recorded the song on his 2010 album Tried and True.

Cesar Romero as "The Joker"

First part of an interview done in 1985 with Cesar Romero and Marie Windsor on "Skip E. Lowe Looks at Hollywood."
at 6:00 PM No comments:

Cesar Romero on "What's My Line?"