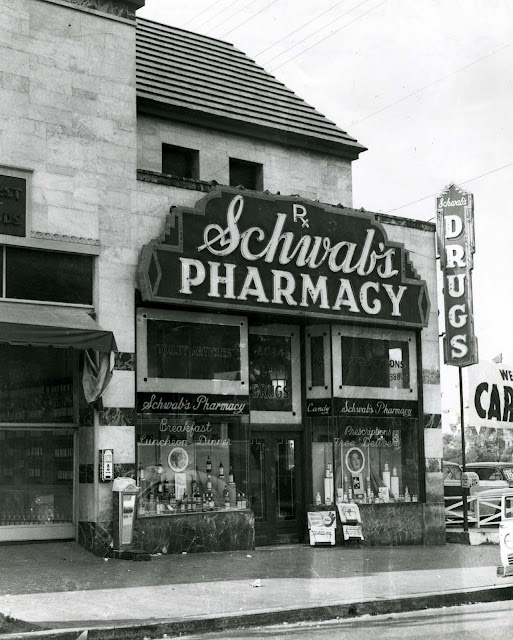 Bernard Joseph Schwab (April 4, 1909 - March 5, 2003) last survivor of the four brothers (Bernard, Leon, Jack, and Martin) who founded Hollywood’s fabled Schwab’s Pharmacy on Sunset Boulevard. Bernard was born in Philadelphia on Oct. 2, 1908, to Polish immigrants. After moving to Los Angeles, the brothers bought a failing drugstore on Sunset Boulevard in 1932, attached their name to it and began catering to actors, writers and others who frequented nearby studios (Republic, RKO, Columbia), helping with credit and installing a special phone so hopefuls could receive incoming calls from studios and agents. There were six stores at the peak of their success, but the Sunset Boulevard location was the most famous. 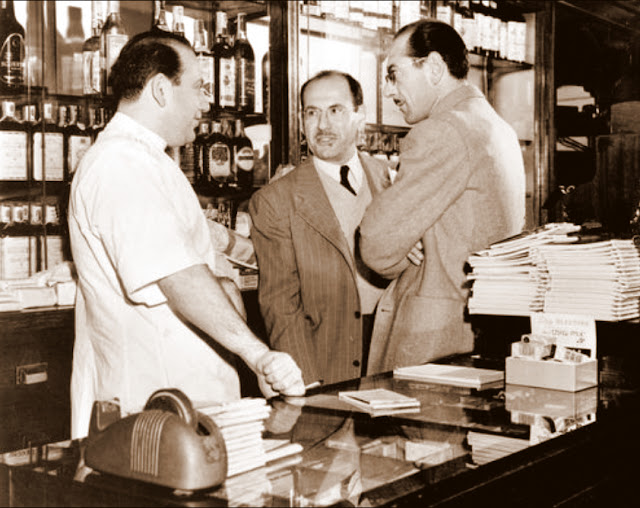 Schwab's was featured in Gloria Swanson's tour de force film "Sunset Boulevard," co-written and directed by Billy Wilder in 1950. William Holden's character in the film, screenwriter Joe Gillis, is rebuffed by a studio magnate and then narrates: "After that, I drove down to headquarters. That's the way a lot of us think about Schwab's. Kind of a combination office, coffee klatch and waiting room. Waiting, waiting for the gravy train." 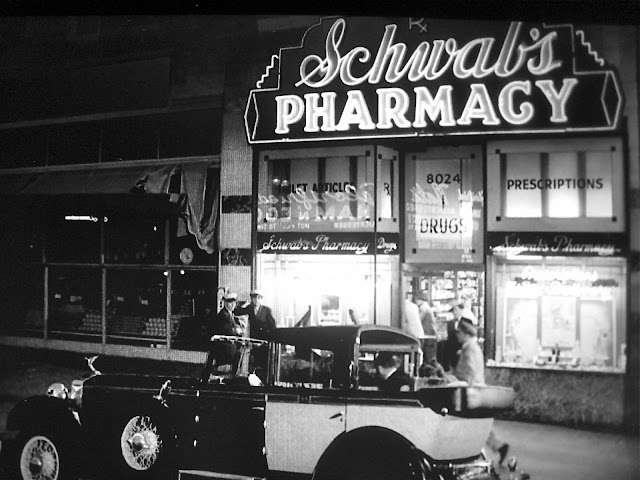 Schwab's fell on hard times and closed in 1983. All the contents were auctioned to satisfy debts, and the building was razed to make way for a shopping complex. 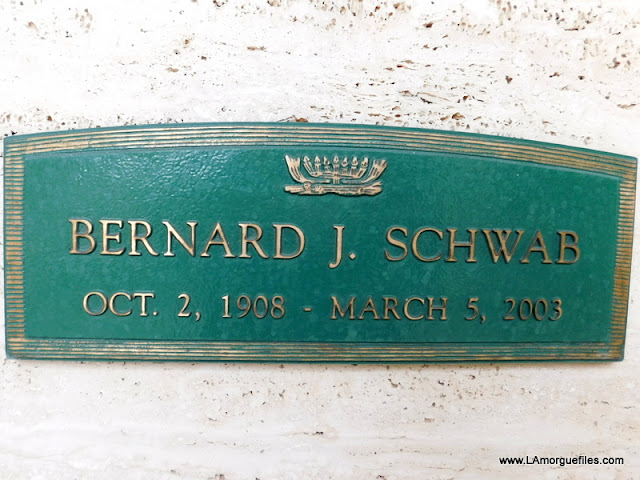 Widowed since the death of his wife, Frances, Bernard Schwab was survived by four sons, Leland, Michael, John and Robert; 12 grandchildren; and three great-grandchildren. Bernard was active in the Wisdom Masonic Lodge 202, Scottish Rite Temple, Al Malaikah Temple and the Peace Officers Shrine Club. Bernard and Frances Schwab are interred at Hillside Cemetery in Los Angeles. 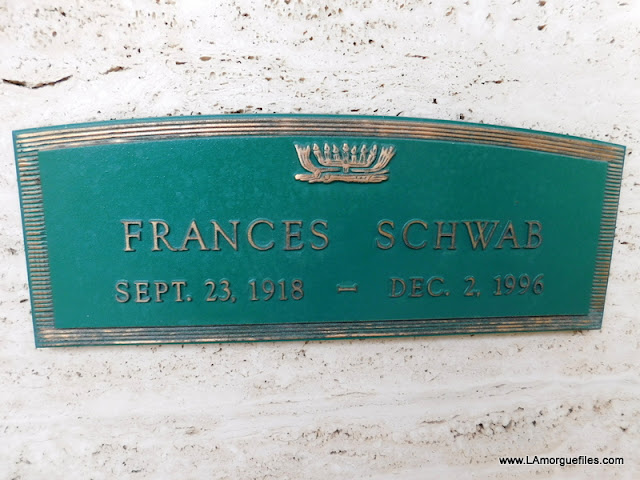 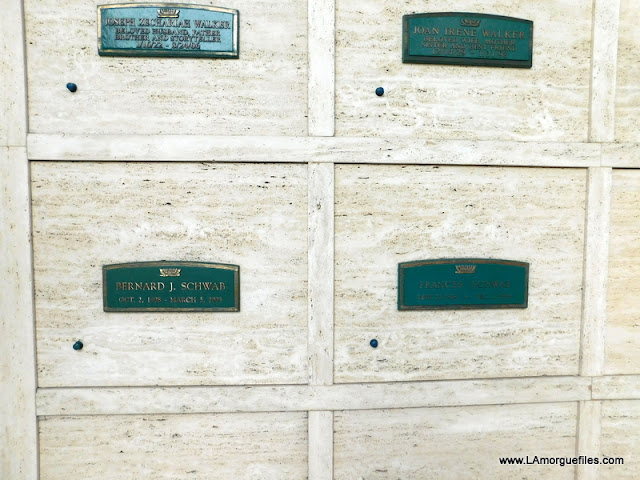 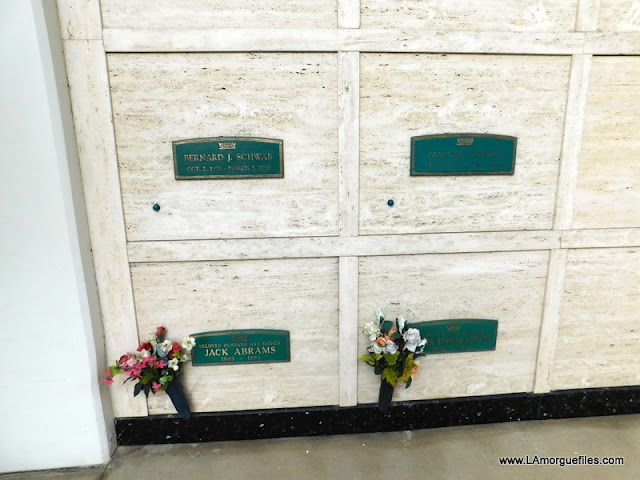 Schwab's Pharmacy was a drugstore located at 8024 Sunset Boulevard in Hollywood, California, and was a popular hangout for movie actors and movie industry dealmakers from the 1930s through the 1950s.[1] 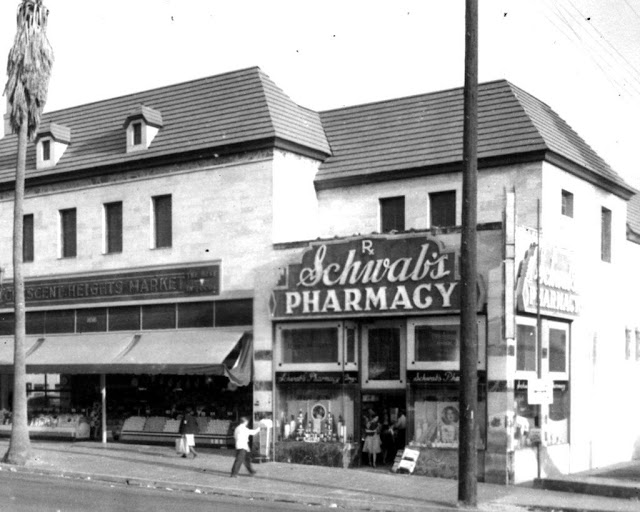 Opened in 1932 by the Schwab brothers, Schwab's Pharmacy in Hollywood became the most famous and longest operating outlet of their small retail chain.[2] Like many drug stores in the United States during the mid-twentieth century, Schwab's sold medicines and had a counter serving ice cream dishes and light meals.

Schwab's closed in October 1983.[3] Five years later, on October 6, 1988, the building was demolished to make way for a shopping complex and multiplex theater. 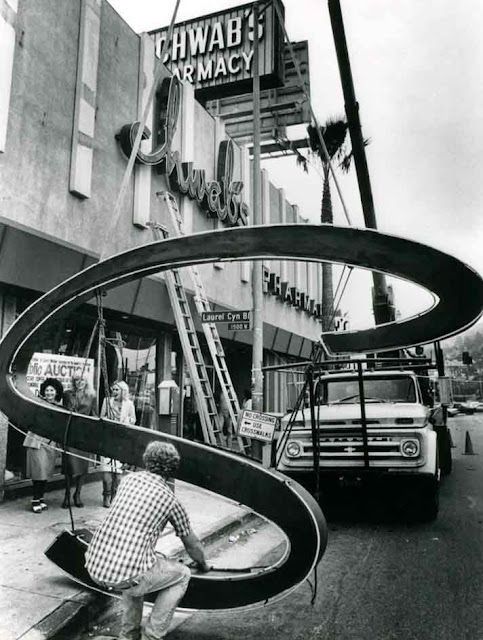 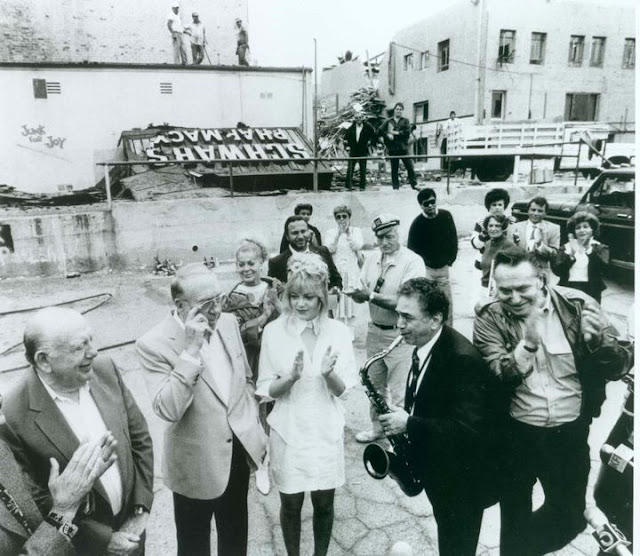 Sidney Skolsky, a syndicated Hollywood gossip columnist for the New York Daily News who was the first journalist to use the nickname "Oscar" for the Academy Award in print, made Schwab's famous in the 1930s. He used the drugstore as his office, and called his column in Photoplay, the premiere movie magazine in the U.S. at the time, "From A Stool At Schwab's."[4]

A persistent Hollywood legend has it that actress Lana Turner was "discovered" by director Mervyn LeRoy while at the soda counter at Schwab's. While the 16-year-old Turner was discovered at a soda counter, the location was not Schwab's but another establishment, the Top Hat Cafe, farther east on Sunset Boulevard at McCadden Place, directly across the street from Hollywood High School where she was still a student. The person who discovered her was not LeRoy but The Hollywood Reporter publisher William Wilkerson.[5][6] 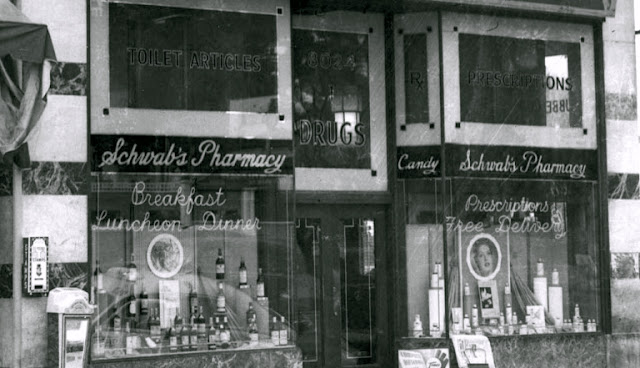 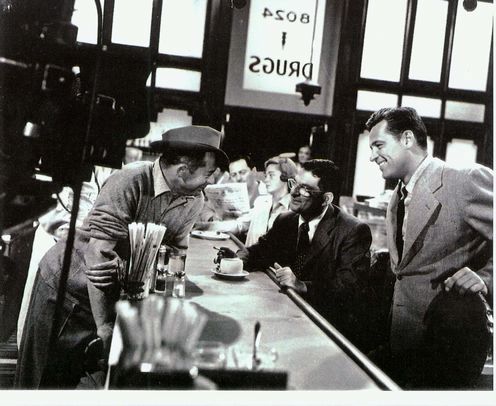