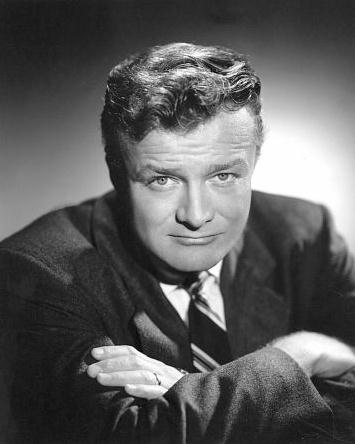 “In other words...you can't be a misogynist and expect women to appreciate you.”

Brian Keith (November 14, 1921 – June 24, 1997) was an American film, television, and stage actor, who in his four decade-long career gained recognition for his work in movies such as the 1961 Disney film, The Parent Trap, the 1966 movie, The Russians Are Coming, the Russians Are Coming, and the 1975 movie, The Wind and the Lion. On television, two of his best known roles were that of a widowed uncle turned bachelor, Bill Davis, in the 1960s sitcom, Family Affair, and the title character of a tough judge, in the 1980s drama, Hardcastle and McCormick. He also starred in his own sitcom which featured actresses Shelley Fabares and Victoria Young, his real-life ex-wife. 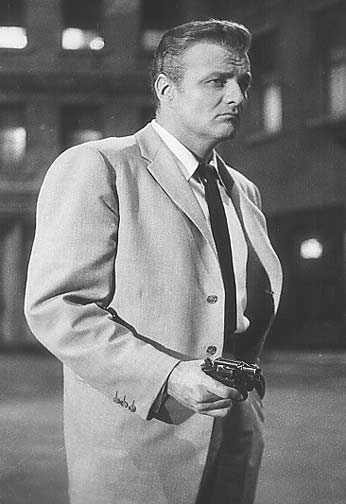 The movies led Keith to his biggest break in 1966, the role of Uncle Bill Davis on CBS's popular television situation comedy Family Affair. This role that earned him three Emmy Award nominations for Best Actor in A Comedy Series. The show made him a household name. It was also the answer to such successful 1960s and 1970s sitcoms that dealt with widowhood and/or many single parent issues such as: The Andy Griffith Show, My Three Sons, The Beverly Hillbillies, Petticoat Junction, Here's Lucy, Julia, The Courtship of Eddie's Father, The Brady Bunch, The Partridge Family and Sanford And Son. When CBS requested that he pose for Christmas publicity shots connected with Family Affair, Keith refused on the basis that this was exploitative of the holiday. During its first season in 1966, the show was an immediate hit, ranking #15 in the Nielsen Ratings, and became an overnight sensation. 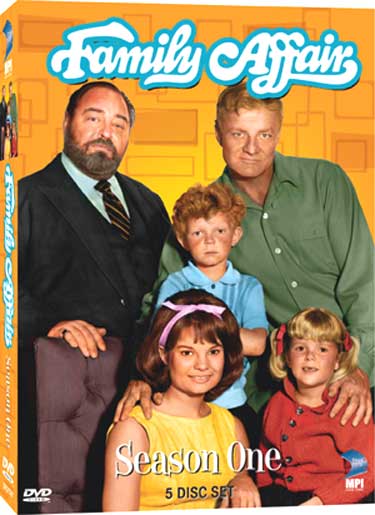 Also starring on the show was an already established British character actor, Sebastian Cabot, as Mr. Giles French. The show also brought in several unfamiliar actresses and/or actors (who became Brian Keith lifelong fans): Kathy Garver as older niece Catherine "Cissy" Patterson-Davis, the late Anissa Jones as Ava Elizabeth "Buffy" Paterson-Davis and Johnny Whitaker as Jonathan "Jody" Patterson-Davis. Most of the relative newcomers got along well with the veteran star, esp. Garver, to whom Keith became a "second uncle," both on and off the set.


Keith was offered the role of Deke Thornton in The Wild Bunch also by Sam Peckinpah, but he turned it down because of Family Affair. This led to a dispute between the two friends.

By the end of its 5th season in 1971, Family Affair was still the most popular show, but CBS decided to end the show, after 138 episodes. The reason for the cancellation was because of the infamous rural purge -- which cancelled all Southern shows to make room for adult-oriented sitcoms such as the already #1 sitcom, All in the Family.


Brian Keith's friendship with Johnny Whitaker's family began in the mid-1960s, when Whitaker was guest-starring in one of Keith's mentor's movies, which eventually led him to a co-starring role on Family Affair. He said, "I had done The Russians Are Coming, the Russians Are Coming (1966) with Brian Keith; and he and I got along real well. We never had any scenes together in The Russians Are Coming, the Russians Are Coming. But his hotel room was right down the hall from mine, and he would always come right after work, and say, 'Can Johnny Whitaker come out to play?' And so, we did, and at the time he had 1 daughter, 1 on the way and had just adopted another child, I believe, cause he love kids and was feeling homesick and saw me in the play, you know?" Whitaker said of the show Family Affair was supposed to have another child actor that Keith's character had wanted to come to fruition, "So, the original role of Jody was set for a 10-year-old boy. Cissy was supposed to be a 16-year-old girl, and Buffy was a 6-year-old girl. So, Jody was the middle child, and when Brian had suggested that they take a look at this little kid, that he just was on a series with, you know, but, he was sick, and he said 'Oh you're a handful of teams.'" The last thing Johnny said was about Brian being exhausted from all the hard work, coming through an apartment on the set, "Take a look a him, just for a next-door neighbor or something, but he's got a lot of talent and he was cute, and all this, so I went on the set, I was one of the only 6-year-old boys, but they had Anissa and Pamela [voice of Lucy], as I remember and lots of other shows, and a couple of other girls, and they just had me talk and read some lines with them, and then, when Anissa and I got together, the producers said, 'You know what? This is it! Magic for television twins." Years after the show's cancellation, both Keith and Whitaker each had successful careers, but had not kept in touch. The death of Keith's daughter Daisy in 1997 drew both Keith and Whitaker close while Keith was battling cancer. According to a 1997 interview on Entertainment Tonight with Brian Keith, he said Whitaker looked his name up in the phone book and called his home, which questioned Whitaker, which almost led to a misunderstanding with each other, but had enjoyed a wonderful reunion together [over the phone], for the last time, before Keith took his own life.

In 2007, a decade after Keith's passing, Whitaker and co-star Kathy Garver were both invited to the TV Land Awards to pay respects to Keith. Posthumously, Keith was given a star on the Hollywood Walk of Fame, where Garver was one of the presenters.

Keith once again returned to series television in 1983 with, Hardcastle and McCormick, the latter in the role of a cranky retired judge named Milton C. Hardcastle. Familiar actor Daniel Hugh Kelly co-starred as ex-con Mark McCormick in the ABC crime drama with elements of comedy. The chemistry of Keith & Kelly were both a hit in the 1980s. Keith continued playing the role until its cancellation in 1986. 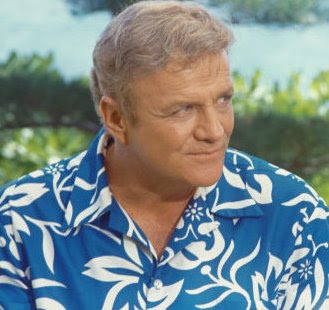 Keith went on to star as the pediatrician Dr. Sean Jamison in the NBC sitcom The Brian Keith Show, filmed in California but set in Hawaii and also known as The Little People. Co-star Shelley Fabares played his daughter, Dr. Anne Jamison. Michael Gray played Ronnie Collins, a student doctor in the first season. Nancy Kulp and Roger Bowen appeared in the second season. Keith's third and last wife, the former Victoria Young, appeared in the role of Nurse Puni.

Keith had lead roles in Archer, and his final TV role, Heartland.

Keith also starred in the role of Steven "The Fox" Halliday in the six-part television miniseries, The Zoo Gang, about a group of former underground freedom fighters from World War II. The show also starred Sir John Mills, Lilli Palmer, and Barry Morse.

Keith spoke fluent Russian, which led to his casting as a Russian in two roles: the Soviet Premier in World War III with Rock Hudson; and as a Soviet scientist in Meteor with Natalie Wood. In The Russians Are Coming, the Russians Are Coming, where he played the unexcitable police chief of an island where a Soviet submarine runs aground, however, his character had to have Russian translated to him by Alan Arkin's character. In his last film, Keith played President William McKinley in Rough Riders (1997). Director John Milius dedicated Rough Riders to "Brian Keith, Actor, Marine, Raconteur."


On June 26, 2008, the Hollywood Walk of Fame installed a star in Brian Keith's honor on the world famous sidewalk in California.

Keith married three times, first to Frances Helm; then, in 1955, to Judith Landon; and finally, in 1970, to Hawaiian actress Victoria Young (née Leialoha), who later appeared on The Brian Keith Show (1972–1974) as Nurse Puni. Keith fathered four children but also adopted three others with Judith Landon. Daisy Keith, one of his children with Victoria Young, became an actress and appeared with her father in the short-lived series Heartland in 1989. Keith attended the funeral of longtime friend Michael Landon in 1991. 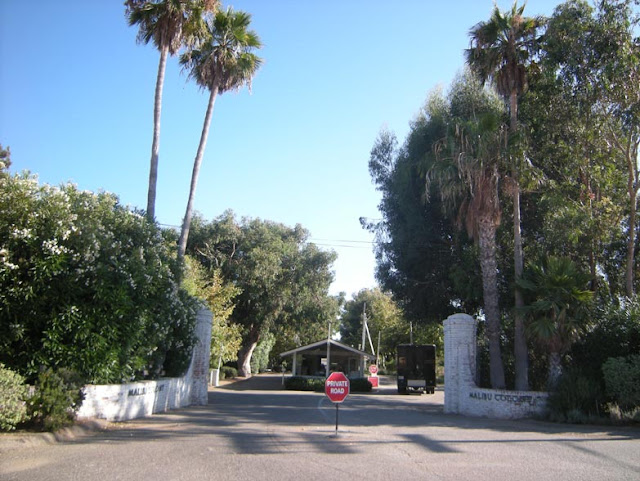 During the later part of his life, Keith suffered from emphysema and lung cancer despite having quit smoking ten years earlier (he appeared in an endorsement campaign for Camel cigarettes in 1955). He was found dead of a self-inflicted gunshot wound in Malibu, California on June 24, 1997, two months after his daughter Daisy committed suicide. It was also reported that he had financial problems and suffered from depression throughout his final days. Keith's family were joined by many mourners at a private funeral, including Family Affair co-stars Johnny Whitaker and Kathy Garver, and Hardcastle & McCormick co-star Daniel Hugh Kelly. 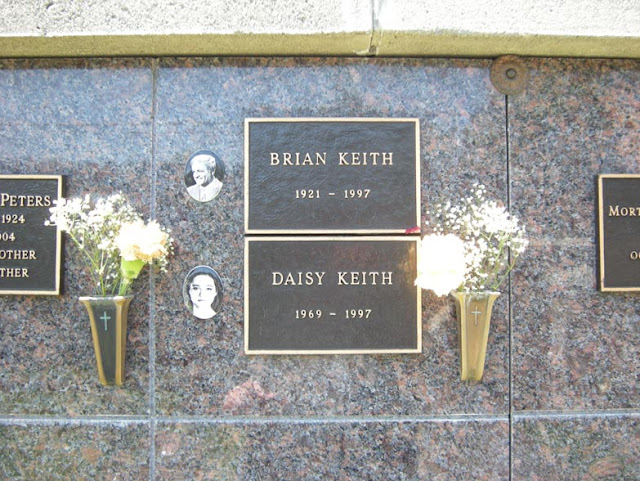 His remains are buried next to those of his daughter Daisy at Westwood Village Memorial Park Cemetery in Los Angeles, California. 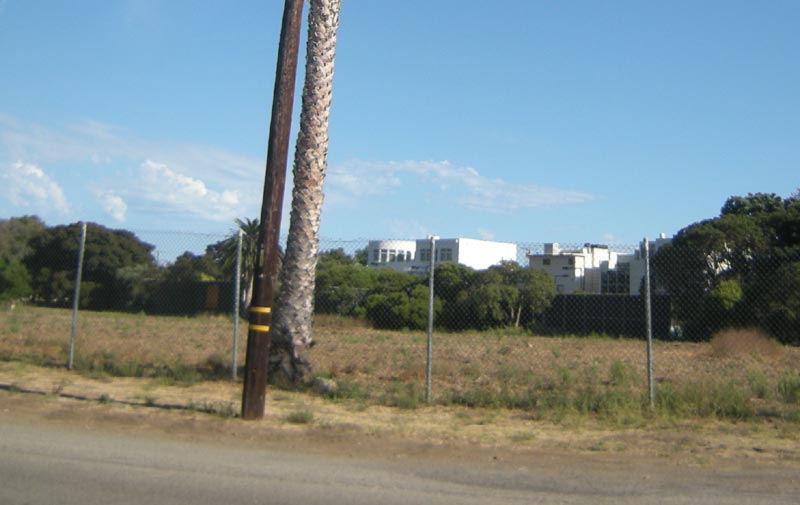 Following is Brian Keith's formal obituary as it appeared in 1997:


On Tuesday, Los Angeles County sheriff's deputies found Keith's body inside his home at 10:13 a.m., after being alerted to the scene by family members.

"Brian Keith was a generous actor, a kind man and a true friend," said Daniel Hugh Kelly, who costarred with Keith for three seasons on the popular action series Hardcastle & McCormick in the mid-1980s.

Born in November 1921 in Bayonne, New Jersey, Keith's career spanned more than 40 years. In film, he costarred with the likes of Marlon Brando and Liz Taylor (Reflections in a Golden Eye ) and Burt Reynolds ( Sharky's Machine). He was also dad to Hayley Mills (or, at least, one of her twin selves) in the 1961 classic, The Parent Trap.

On TV, from 1966-71, he was Bill Davis, the rock of the orphaned Family Affair clan--which included child actor stand-outs Johnnie Whitaker and Anissa Jones. (Jones died of a drug overdose in 1976 at the age of 18.) Whitaker, now 37, said Tuesday that he spoke with his onetime TV dad on the telephone about five days before his death. "He was not feeling good because he had been going through the chemotherapy for his cancer," Whitaker said."And he'd been having other problems." 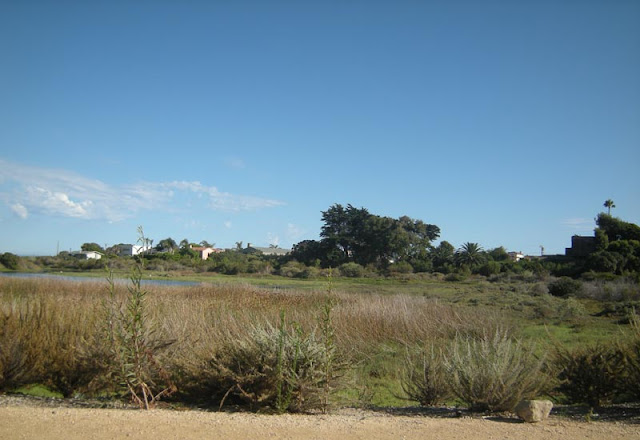