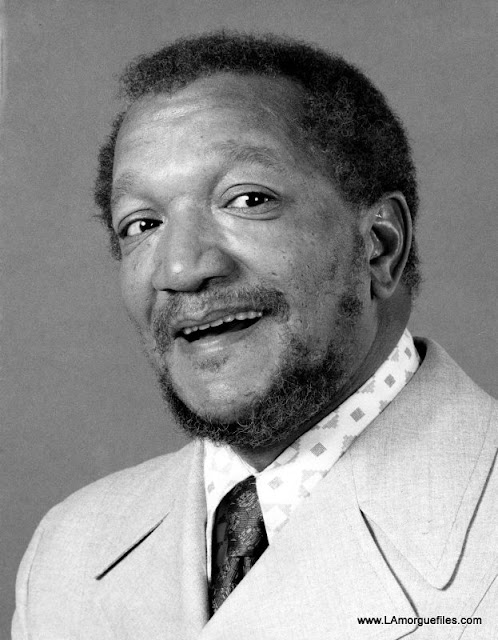 John Elroy Sanford [1] (December 9, 1922 – October 11, 1991), better known by his stage name Redd Foxx, was an American comedian and actor, best known for his starring role on the sitcom Sanford and Son. 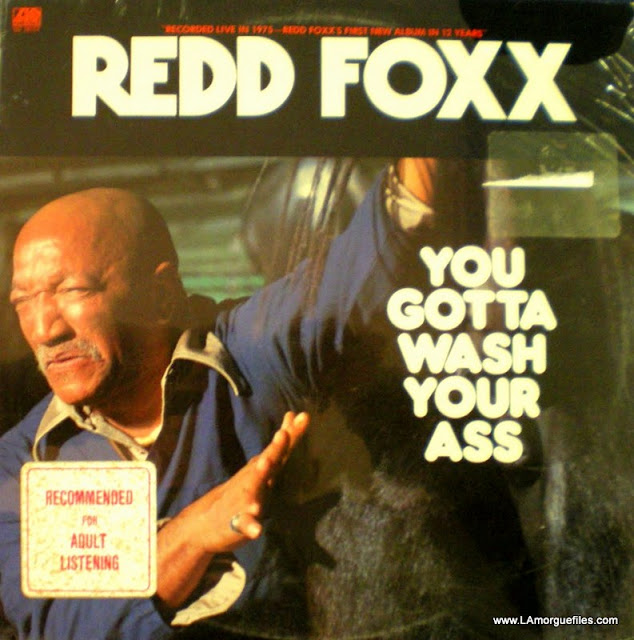 Foxx was born in St. Louis, Missouri and raised on Chicago's South Side. His mother was half Seminole Indian. His father, an electrician, left his family when Foxx was four years old. Foxx was raised by his mother, his minister, and his grandmother. He briefly attended DuSable High School with future Chicago mayor Harold Washington.

In the 1940s, he was an associate of Malcolm Little, later known as Malcolm X. In Malcolm's autobiography, Foxx is referred to as "Chicago Red, the funniest dishwasher on this earth." Foxx earned the nickname due to his reddish hair and complexion. His stage surname was taken from baseball star Jimmie Foxx. During World War II, Foxx dodged the draft by eating half a bar of soap before his physical, a trick that resulted in heart palpitations.[2] 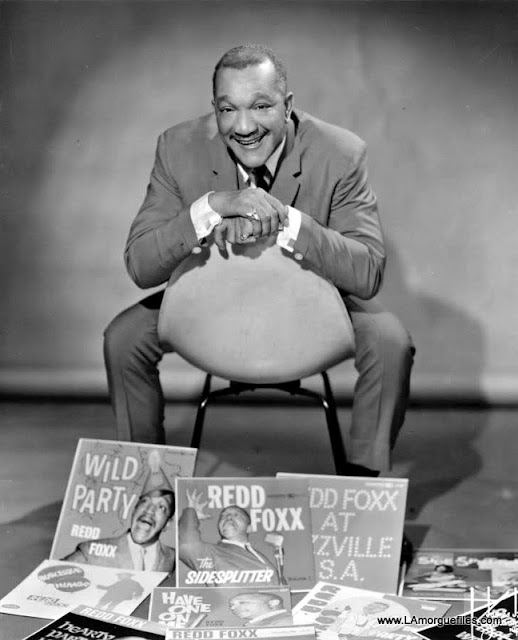 Foxx gained notoriety with his nightclub act (considered by the standards of the time to be raunchy). His big break came after singer Dinah Washington insisted that he come to Los Angeles, where Dootsie Williams of Dootone records caught his act at the Brass Rail nightclub. Foxx was signed to a long-term contract and released a series of comedy albums that quickly became cult favorites.[3] 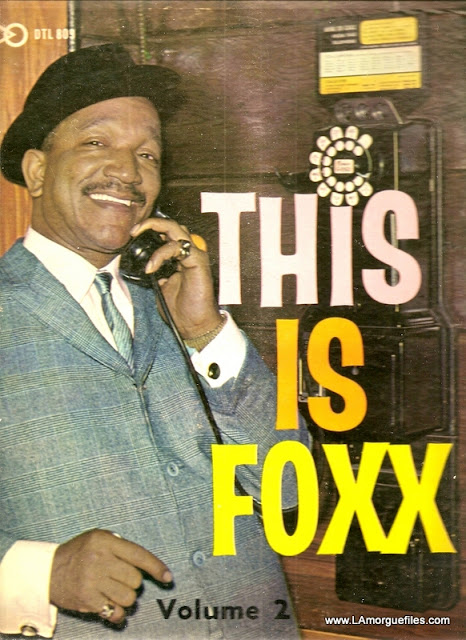 He was also one of the first black comics to play to white audiences on the Las Vegas Strip. He used his starring role on Sanford and Son to help get jobs for his friends such as LaWanda Page, Slappy White, Gregory Sierra, Don Bexley, Leroy Daniels, Ernest Mayhand and Noriyuki "Pat" Morita. 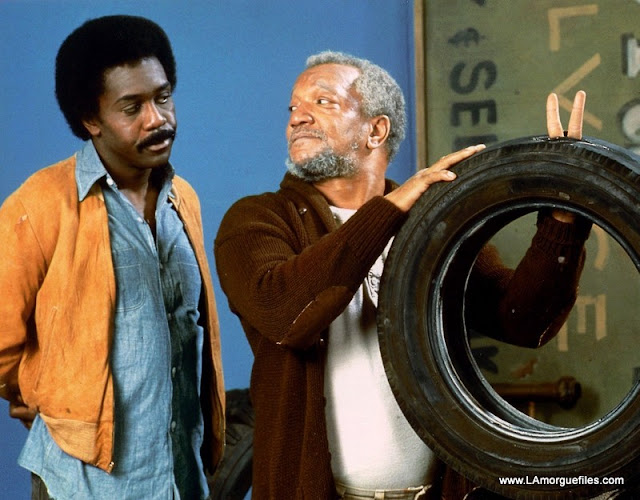 Foxx achieved his most widespread fame starring in the television sitcom comedy Sanford and Son, an adaptation of the BBC series, Steptoe and Son, which premiered on the NBC television network on January 14, 1972, and was broadcast for six seasons, the final episode airing on March 25, 1977. Foxx played the role of Fred G. Sanford ("Fred Sanford" was actually Foxx's brother's name), while Foxx's co-star Demond Wilson played the role of his son Lamont. 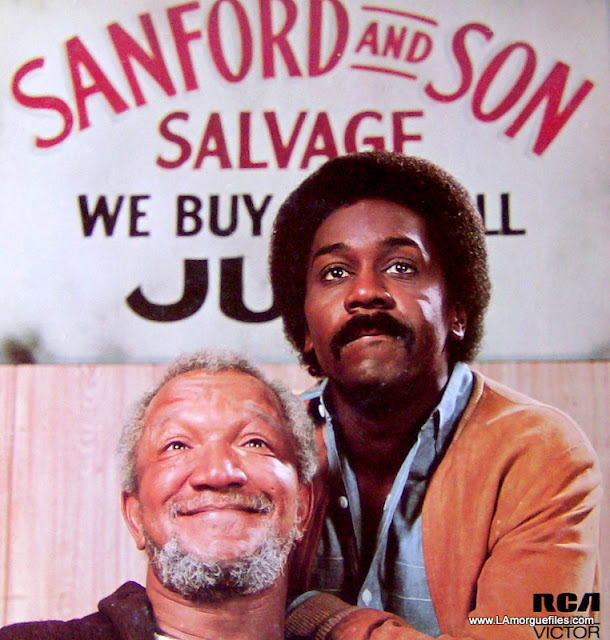 Post-Sanford and Son career
In 1977, Foxx left Sanford and Son, after six highly successful seasons (and the show was canceled solely due to his departure) to star in a short-lived variety show, but by 1980 he was back playing Fred G. Sanford in a brief revival/spin-off, Sanford. In 1986, he returned to series television in the ABC series The Redd Foxx Show, which was cancelled after 12 episodes due to low ratings. 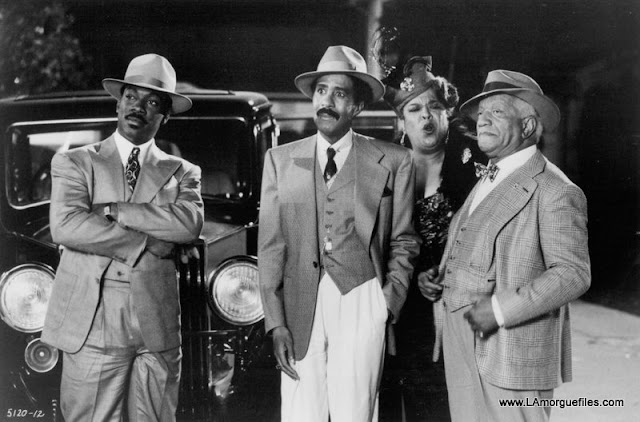 HARLEM KNIGHTS (1989)
Foxx appeared to make a comeback (until his death) with the 1991 series, The Royal Family, in which he co-starred with his long-time friend Della Reese. 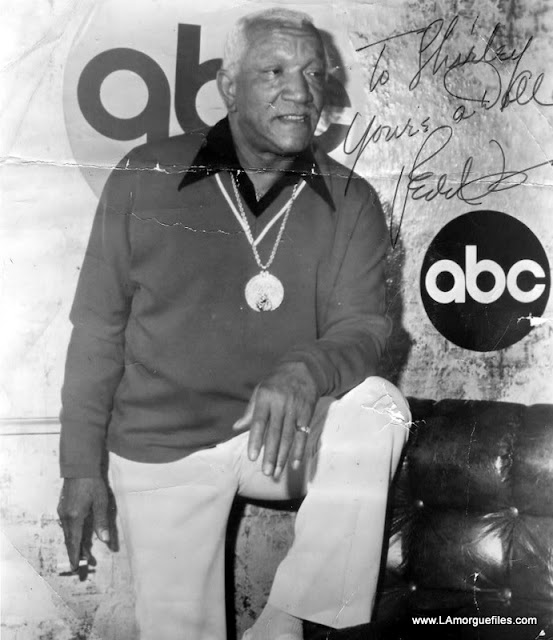 Personal life
Marriages
Redd Foxx was married four times. His first marriage was to Evelyn Killebrew in 1948, but was short-lived and ended in divorce in 1951.
His second marriage was to Betty Jean Harris, a showgirl and dancer, who was a colleague of LaWanda Page, who would later be known as Foxx's TV rival Aunt Esther on Sanford and Son. The couple wed on July 22, 1956. Foxx adopted Harris's daughter Debreca, who was about nine years old at the time and then assumed the surname "Foxx." The marriage ended in divorce in 1975.
Foxx then married Korean-American Yun Chi Chung in 1976, but the marriage was again brief, ending in 1981.
At the time of his death in 1991, Foxx was married to Ka Ho Cho, who used the name Ka Ho Foxx.[4] 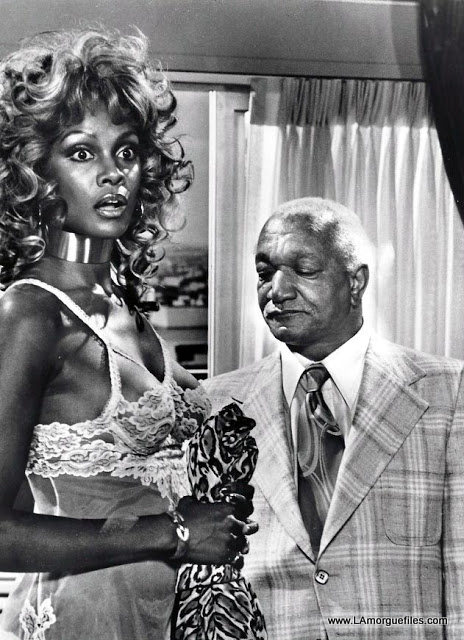 Financial and tax problems
According to People Magazine, "Foxx reportedly once earned $4 million in a single year, but depleted his fortune with a lavish life-style, exacerbated by what he called 'very bad management.'" Contributing to his problems was a 1981 divorce settlement of $300,000 paid to his third wife. In 1983 he filed bankruptcy, with proceedings continued at least through 1989.[5]
The IRS filed tax liens against Redd Foxx's property for income taxes he owed for the years 1983 through 1986 totaling $755,166.21. On November 28, 1989, the IRS seized his home in Las Vegas and seven vehicles (including a 1927 Model T, a 1975 Panther J72,[6] a 1983 Zimmer, and a Vespa motor scooter) to pay the taxes which by then had grown to $996,630, including penalties and interest. Agents also seized "$12,769 in cash and a dozen guns, including a semiautomatic pistol," among some 300 items in total, reportedly leaving only Foxx's bed.[7][8][9] Foxx stated that the IRS "took my necklace and the ID bracelet off my wrist and the money out of my pocket . . . I was treated like I wasn't human."[10]
It has been reported that, at the time of his death in 1991, Foxx owed more than $3.6 million in taxes.[4] 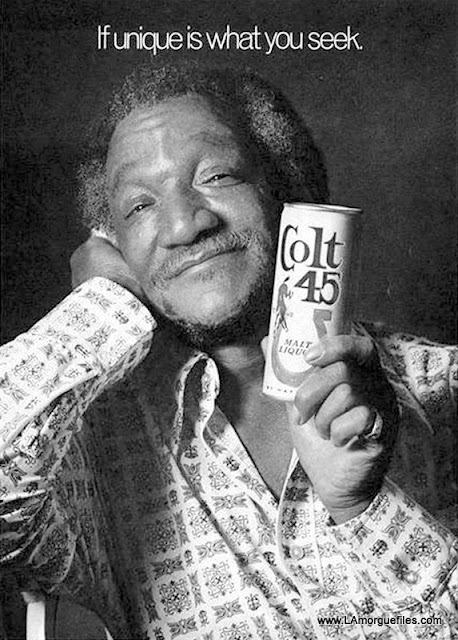 Death
On October 11, 1991, during a break from rehearsals for The Royal Family[11], he suffered a fatal heart attack on the set. Reportedly, co-star Della Reese and the rest of the cast and crew thought he was doing his classic "I'm coming, Elizabeth!" fake heart attack routine he made famous on Sanford and Son, even going as far as collapsing to the floor, although that was not part of the usual act.[12] However, this heart attack was real, and Foxx did not regain consciousness.
Foxx was posthumously given a star on the St. Louis Walk of Fame on May 17, 1992.[1]
A few years after Foxx's death, several buyers of his home claimed his property was "haunted" by him.[13][14] Some people have even gone as far as claiming Foxx faked his death because he still owed the IRS money. Martin Lawrence poked fun at these claims on the pilot of his sitcom Martin. He said, "The man faked it. If you owed 16 billion dollars in taxes, what would you do?" 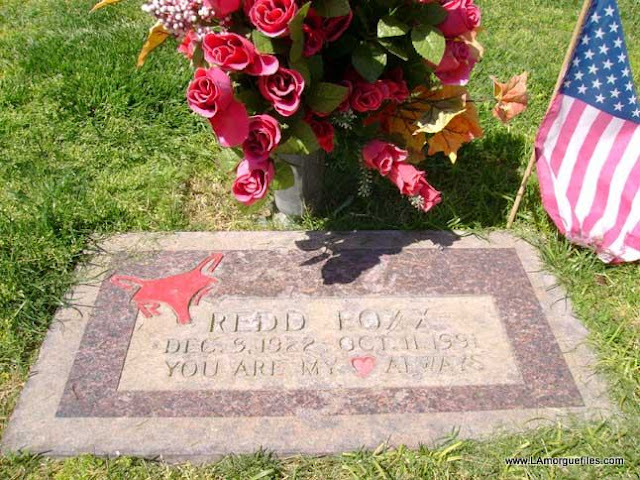 Foxx is buried in Las Vegas, at Palm Valley View Memorial Park. In 1993, his mother Mary Carson (1903–1993), who outlived Foxx, died nearly 17 months after Foxx's death, and was buried just to the right of her famed son. 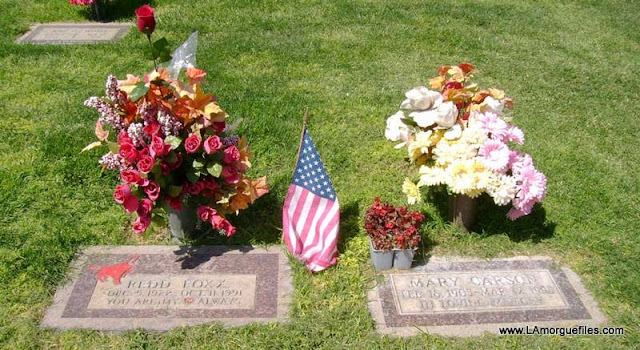 Influence
Comedian Chris Rock cites Redd Foxx as an influence. An episode of his show Everybody Hates Chris shows young Chris Rock overhearing his parents' Redd Foxx albums and getting started doing stand-up through retelling the jokes at school.
Actor Jamie Foxx chose the Foxx surname as part of his stage name in tribute to Redd Foxx. 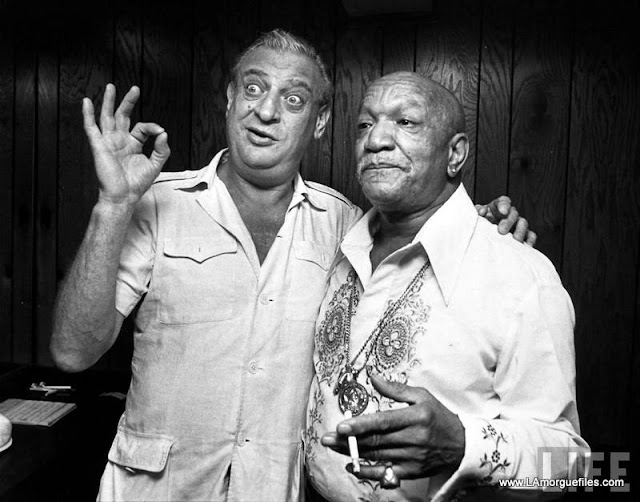 Portrayals of Foxx in popular media
In the first season of In Living Color, in reference to Foxx's financial troubles, Foxx was portrayed by Damon Wayans, who is making a public service announcement to encourage people to pay their taxes.
In the film Why Do Fools Fall in Love, Foxx is portrayed by Aries Spears. He is shown performing a stand-up comedy routine.
In the animated television series Family Guy parody of Star Wars episode "Blue Harvest", Redd Foxx appears very briefly as an X-wing pilot. When his ship is shot down, he cries "I'm coming Elizabeth!" before dying. In addition to this, he has been parodied on Family Guy as his Sanford and Son character, as have other characters of that show, some shown in the form of Peter Griffin.
Foxx was meant to be featured in the MTV show Celebrity Deathmatch, advertised at taking on Jamie Foxx in the episode "When Animals Attack". Instead of Redd Foxx though, Jamie Foxx fought Ray Charles.
In the Boondocks episode "Stinkmeaner 3: The Hateocracy" he is portrayed as Lord Rufus Crabmiser, one of Stinkmeaner's old friends coming to kill the Freeman family. Childhood friend and Sanford and Son co-star Lawanda Page is also portrayed in the same episode as Lady Esmeralda Gripenasty.
Redd Foxx appears as a minor character in the 2009 James Ellroy novel Blood's a Rover. He gives a bawdy eulogy at the wake of Scotty Bennett, a murdered rogue LAPD detective including the line "Scotty Bennett was fucking a porcupine. I gots to tell you motherfuckers that it was a female porcupine, so I don't see nothing perverted in it."[15] 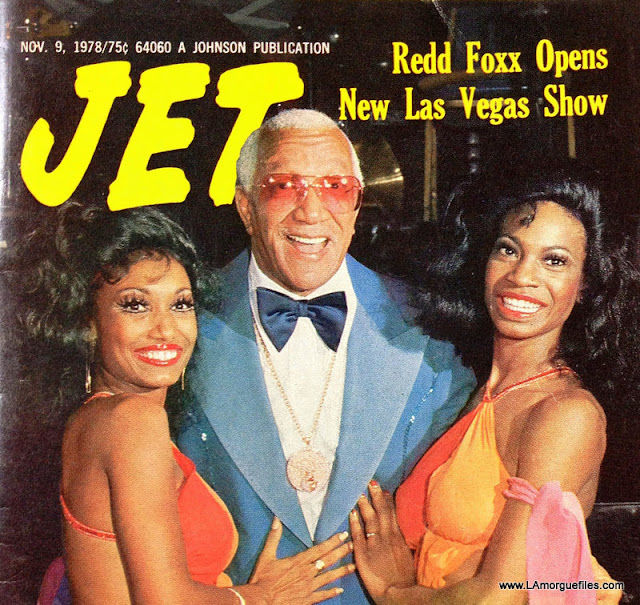 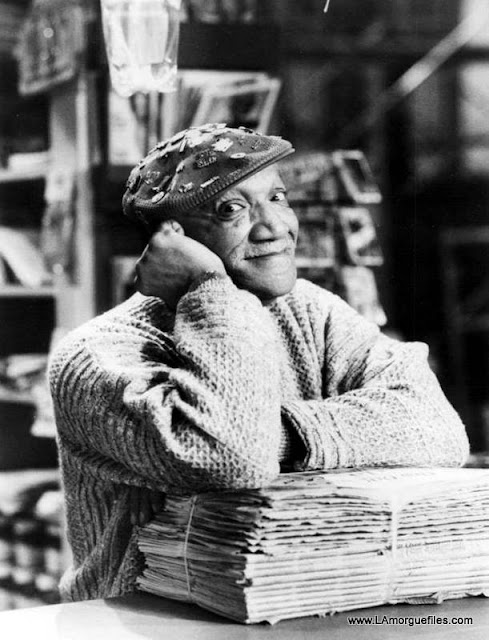