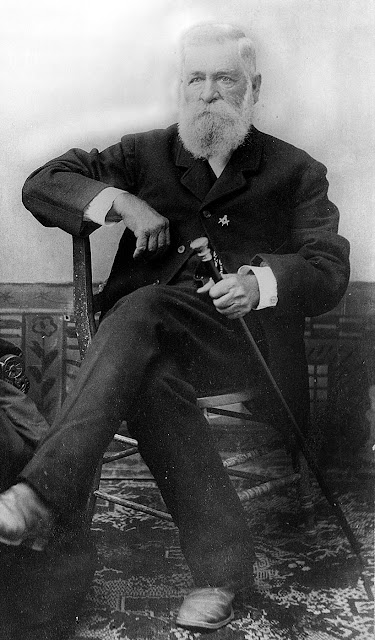 Nicholas Porter Earp (September 6, 1813 – February 12, 1907) was the father of well-known Western lawmen Virgil, Wyatt, and Morgan, and their lesser-known brothers James and Warren Earp. He was a justice of the peace, a farmer, cooper, constable, bootlegger, wagon-master, and teacher. 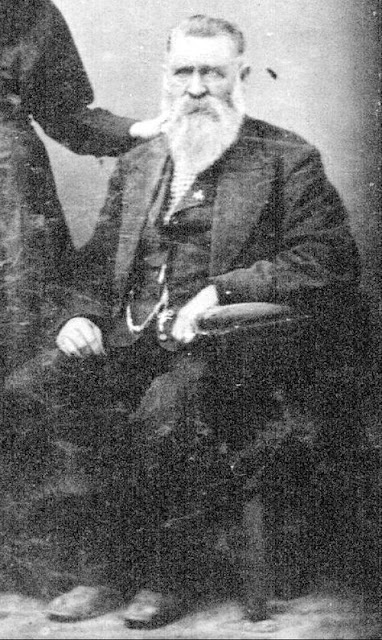 Nicholas Earp was born in Lincoln County, North Carolina, to Walter Earp (b. 1787, Montgomery County, Maryland – d. January 30, 1853) and Martha Ann Early (b. August 28, 1790, Avery County, North Carolina – d. September 24, 1881). The Earp family was of English and Scotch-Irish descent.[1] The first Earp immigrant to the American colonies was Thomas Earp Jr., who arrived in Anne Arundel County on July 6, 1674, as an indentured servant from Ireland. He is buried in St. Anne's Parish in Annapolis.[2] Nicholas was named for a circuit-riding judge in Kentucky.

Nicholas' father Walter Earp was a school teacher, a Justice of the Peace in Monmouth, Illinois[3] and a Methodist Episcopal preacher. Walter Earp was born in Montgomery County, Maryland in 1787. He was a fifth-generation Marylander and the fourth great-grandson of Thomas Earp, Sr. (1631–1720), an Ulsterman who emigrated from the barony of Fews in County Armagh, Northern Ireland to Maryland. Nicholas' mother, Martha Ann Early, was born in Avery County, North Carolina, on August 28, 1790. Nicholas was the third of ten children; his siblings include six brothers: Lorenzo Dow, Josiah Jackson, James Kelly, Francis Asbury, Jonathan Douglas and Walter C (twins); as well as three sisters: Elizabeth, Mary Ann, and Sarah Ann.

Soon after his birth, his family moved from Virginia to Hartford, Kentucky in 1813, where Nicholas spent the rest of his childhood. As a young man, Nicholas served in the Black Hawk War of 1831 and later was a sergeant in the Mexican-American War. During the Mexican-American War Nicholas served under Captain Wyatt Berry Stapp of the Illinois Mounted Volunteers. Nicholas named his fourth son after him. During the Civil War, Nicholas also served in Iowa as a provost marshal for recruitment. This included his own sons Newton, James, and Virgil who fought for the Union Army. He originally intended to become a lawyer like his father before moving his law practice and his family from North Carolina to Kentucky, where he took up farming. He was also a cooper and sheriff.

On December 22, 1836, in Hartford, Nicholas Porter married Abigail Storm, the daughter of Peter and Anna Maria (Lehman) Sturm (September 21, 1813, in Ohio County, Kentucky – October 8, 1839 Ohio County, Kentucky) who was the great-granddaughter of German immigrants who had originally settled in Frederick, Maryland. Their children: on December 22, 1836 in Hartford, Kentucky. They had two children: 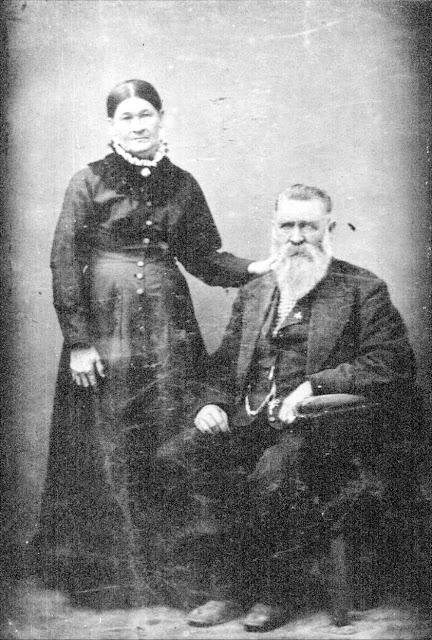 Nicholas Earp and of his second wife, Virginia Ann Cooksey Earp,
circa 1880 to 1899 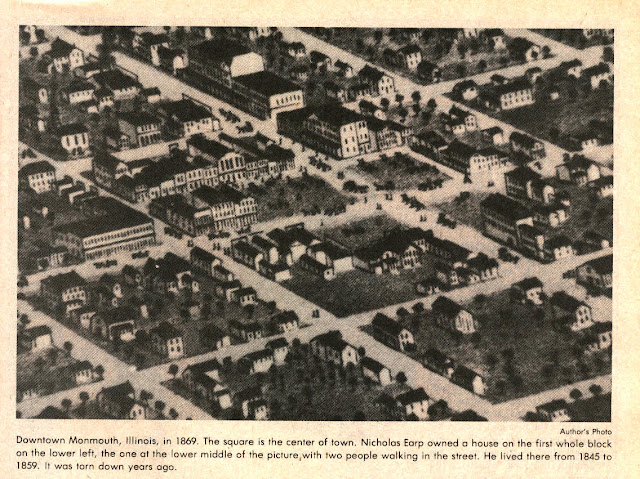 In March 1849,[6] Nicholas Earp joined about one hundred others from Monmouth County, Illinois for a trip to California, where he planned to look for good farm land, not gold. He decided to move to San Bernardino County in the southern part of the state.[7] Nicholas returned to Illinois and the family left for California but their daughter Martha, became ill and died. Nicholas changed plans and moved to Pella, Iowa.[7]

Their new farm in Pella, Iowa, consisted of 160 acres (0.65 km2), 7 miles (11 km) was northeast of Pella, Iowa.[8] Eight years later, on March 4, 1856, Nicholas sold his Pella, Iowa, farm to Aquillin Waters Noe (who resold it on the same day to Hiram Zenas Webster) and the family returned to Monmouth, Illinois, where Nicholas found that nobody needed his services as cooper or farmer.

Unable to find work, Nicholas was elected as the town constable, which he served as for about three years. In 1859, he was tried and convicted of bootlegging. Nicholas was unable to pay the court-imposed fines following his trial, and a lien was levied against the Earp's property. On November 11, 1859, the property was sold at auction. Two days later, the Earps left Monmouth and returned to Pella. 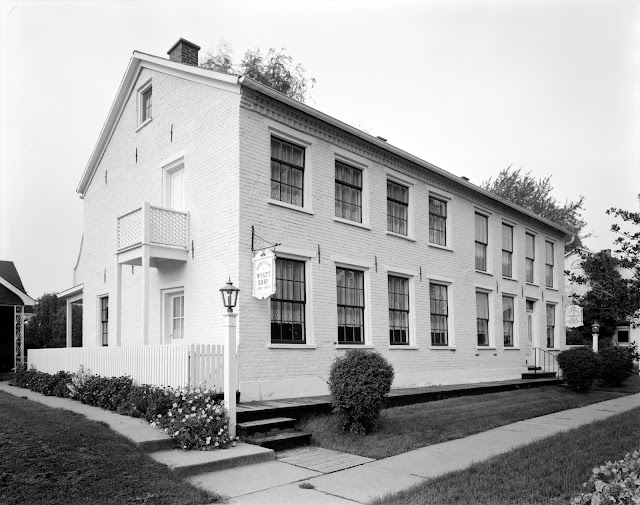 Nicholas apparently made frequent travels to Monmouth throughout 1860 to confirm and conclude the sale of his properties and to face several lawsuits for debt and accusations of tax evasion. On May 12, 1864, the Earp family joined a wagon train heading to California. According to the diaries of Utah immigrants in the wagon train, Nicholas was one of the wagon-masters on their overland trek.

After the American Civil War began, Newton, James, and Virgil joined the Union Army on November 11, 1861. While his father was busy recruiting and drilling local companies, Wyatt, along with his two younger brothers, Morgan and Warren, were left in charge of tending the 80-acre (32 ha) corn crop. Only 13 years old, Wyatt was too young to enlist, but he tried on several occasions to run away and join the army. Each time his father found him and brought him home. James was severely wounded in Fredericktown, Missouri, and returned home in the summer of 1863. Newton and Virgil fought several battles in the east before returning home.[9]

On May 12, 1864, the Earp family joined a wagon train heading to California. Nicolas Earp joined with three other families from Pella, the Rousseaus, the Hamiltons, and the Curtises, and on May 12, 1864, they began a wagon trip to California. They took their children Wyatt, Jim, Morgan, Warren, and Adelia. Seven more wagons joined them during the trip to San Bernardino, California, where they arrived on December 17, 1864. Nicholas rented a farm on the banks of the Santa Ana River near present-day Redlands.[10]

Within the next year Virgil got a job driving a freight wagon to Salt Lake City and took Wyatt with him. Afterward they took jobs with the Union Pacific, which was building the Transcontinental Railroad west from Omaha, Nebraska. Virgil worked as a teamster and Wyatt manned a pick and shovel. Not long after their brothers Jim and Morgan left the family in San Bernardino and heading for the mining towns of Montana.[10]

In spring 1868, the Earps returned to the mid-west and settled in Lamar, Missouri, where Nicholas became the local constable.[11] By November 17, 1869, Nicholas resigned to become Justice of the Peace. His son Wyatt, who had been studying the law, was immediately appointed constable in place of his father.

Some time prior to 1880, Nicholas and Virginia Earp moved back to California, settling in San Bernardino County. The 1880 United States Census shows the Nicholas Earp household included Warren and Morgan and his wife Louisa ("Lou"). Nicholas was recorded as a farmer. Nicholas was also one of the founders of the San Bernardino Society of California Pioneers.

After Virginia's death on January 14, 1893 in San Bernardino, 80 year old Nicholas married Annie Elizabeth Cadd on October 14 of the same year. His new wife, the widow of Ambrose Peck Alexander (1825–1884), was 50 years old.[12][13] She had been born in 1842 in Preston Bissett, Buckingham, England. She died in 1931 and is buried near Virginia and Nellie Earp (wife of son James Earp) at the Pioneer Cemetery in San Bernardino. 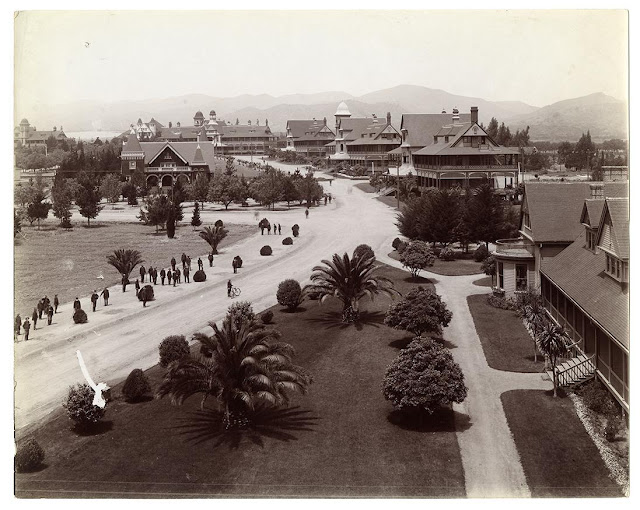 Nicholas Earp died at The Soldier's Home in Sawtelle, California, on February 12, 1907, shortly after he was elected to the Los Angeles County court. 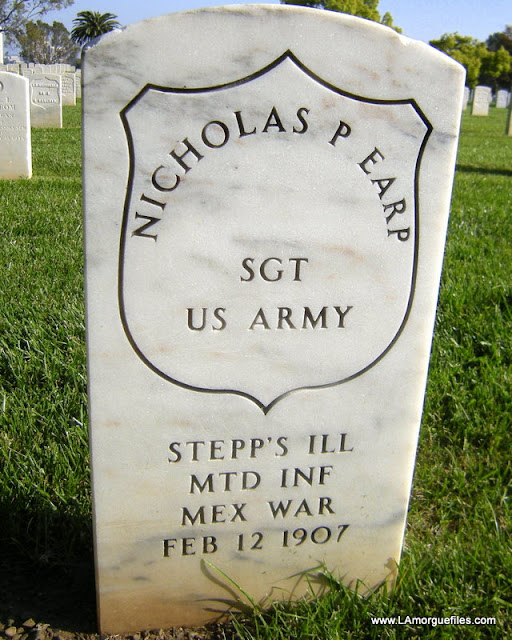 He is buried in West Los Angeles at the Los Angeles National Cemetery. He had outlived six of his ten children.[14] 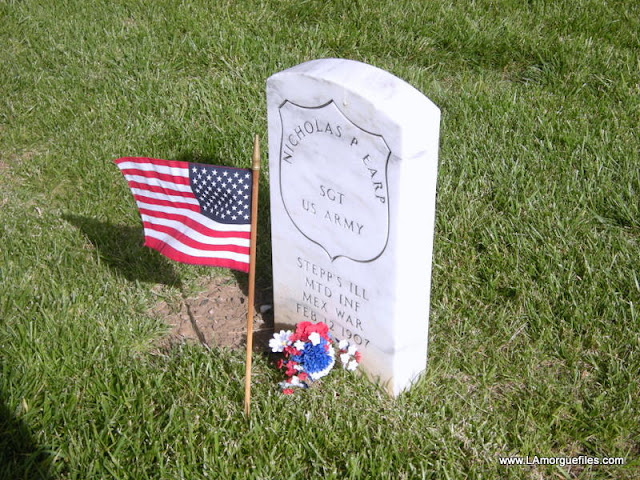 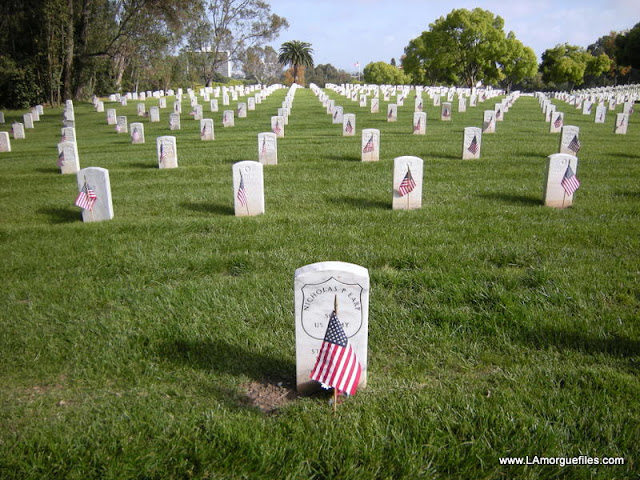