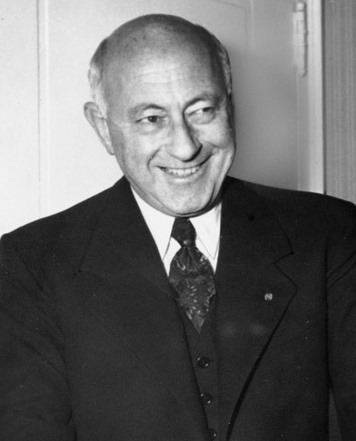 Cecil Blount DeMille (August 12, 1881–January 21, 1959) was a legendary American film director and Academy Award-winning film producer in both silent and sound films. He was renowned for the flamboyance and showmanship of his movies. Among some of his most well-known films are The Ten Commandments (1956), Cleopatra (1934), and The Greatest Show on Earth (1952), which won the Academy Award for Best Picture. 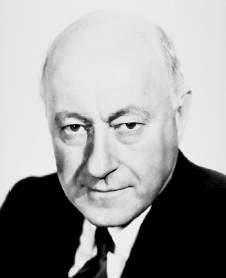 DeMille was born in Ashfield, Massachusetts while his parents were vacationing there and grew up in Washington, North Carolina. While he is known as DeMille (his nom d'oeuvre), his family name was Dutch and is usually spelt Demil.[1] His father, Henry Churchill DeMille (1853–1893), was a North Carolina-born dramatist and lay reader in the Episcopal Church. His mother, Matilda Beatrice (Samuel) DeMille (1853–1923), was born in England to a Sephardic Jewish family but converted to her husband's faith. DeMille attended Pennsylvania Military College in Chester, Pennsylvania from the age of 15. He had an elder brother, William, and a sister Agnes, who died in childhood. Cecil DeMille's famous niece was named for her. After Henry DeMille's death at age 40, Cecil's mother, Beatrice, ran a well-known boarding school for girls in Wayne, New Jersey.

DeMille began his career as an actor on the Broadway stage in the theatrical company of Charles Frohman in 1900. His brother William was already establishing himself as a playwright and sometimes worked in collaboration with Cecil. DeMille co-starred with some of the men and women whom he would later direct in films (Charlotte Walker, Mary Pickford, and Pedro de Cordoba, among others). DeMille also served as producer and/or director for many plays. Some of these plays were later adapted into silent and sound films. Cecil and his brother occasionally worked with David Belasco. Belasco was legendary for the way he lit his stage scenes, as well as creating a lurid atmosphere. In 1911, Belasco premiered a play titled "The Return of Peter Grimm." DeMille claimed he wrote the play and that Belasco had plagiarized DeMille's work without compensation. DeMille later adopted many of Belasco's stage lighting and atmospheric techniques in such films as The Cheat, a move some saw as revenge against Belasco. 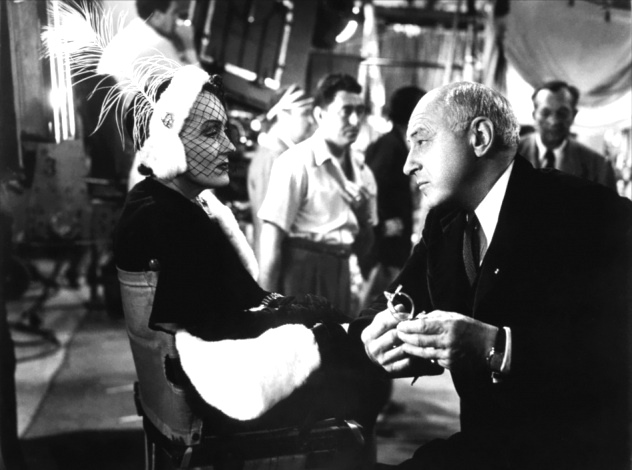 DeMille entered films in 1913. He directed dozens of silent films, including Paramount Pictures' first production, The Squaw Man (1914), which was co-directed by Oscar Apfel, before coming into huge popularity during the late 1910s and early 1920s, when he reached the apex of his popularity with such films as Don't Change Your Husband (1919), The Ten Commandments (1923), and The King of Kings (1927). A few of his silent films featured scenes in two-strip Technicolor.

Cecil B. DeMille had a keen eye for talent and was known for being an instrumental catalyst for the rising status of many a struggling or unknown actor. Actor Richard Dix's best-remembered early role was in the silent version of DeMille's The Ten Commandments. Richard Cromwell owed his 1930s movie fame in part to being personally selected by DeMille for the role as the leader of the youth gang in DeMille's poignant, now cult-favorite, This Day and Age (1933).

DeMille displayed a loyalty to certain supporting performers, casting them over and over in his pictures. They included Henry Wilcoxon, Julia Faye, Joseph Schildkraut, Ian Keith, Charles Bickford, Theodore Roberts, Akim Tamiroff and William Boyd. He also cast leading actors such as Claudette Colbert, Gloria Swanson, Gary Cooper, Jetta Goudal, Robert Preston, Paulette Goddard and Charlton Heston in multiple pictures. He was not known as a particularly good director of actors, often hiring actors whom he relied on to develop their own characters and act accordingly.

DeMille also had a reputation for being a tyrant on the set, and he despised actors who were not willing to take physical risks; such was the case with Victor Mature in Samson and Delilah, when Mature refused to wrestle the lion, though the lion was tame and its teeth had been pulled. (DeMille remarked that Mature was "100% yellow.") Paulette Goddard's refusal to risk personal injury in a scene involving fire in Unconquered cost her DeMille's favor and probably a role in The Greatest Show on Earth. DeMille was, however, adept at directing "thousands of extras," and many of his pictures included spectacular set pieces, such as the parting of the Red Sea in both versions of The Ten Commandments; the toppling of the pagan temple in Samson and Delilah; train wrecks in The Road to Yesterday, Union Pacific and The Greatest Show on Earth; and the destruction of a zeppelin in Madame Satan. DeMille knew what the movie-going public wanted, and he provided it.

DeMille was one of the first directors in Hollywood to become a celebrity in his own right. From 1936 to 1944, DeMille hosted and even acted as pitchman for Cecil B. DeMille's Lux Radio Theater, which was one of the most popular dramatic radio shows at the time. Gloria Swanson immortalized DeMille with the oft-repeated line, "All right, Mr. DeMille, I'm ready for my close-up" in Billy Wilder's Sunset Boulevard, wherein DeMille played himself. DeMille also appeared as himself in Paramount's 1947 all-star musical comedy Variety Girl and he narrated many of his later films, as well as appearing on screen in the introduction to The Ten Commandments.
DeMille first used three-strip Technicolor in Northwest Mounted Police (1940). Following the favorable response to the vivid color photography, shot partly on location in the Canadian Rockies, DeMille decided to always use Technicolor in his films.

While he continued to be prolific throughout the 1930s and 1940s, he is probably best known for his 1956 film The Ten Commandments (which is very different from his 1923 film of the same title). Also representative of his penchant for the spectacular was the 1952 production of The Greatest Show on Earth which gave DeMille an Oscar for best picture and a nomination for best director.
In 1949 or 1950, DeMille was recruited by Allen Dulles and Frank Wisner to serve on the board of the National Committee for a Free Europe, the public face of the organization that oversaw the Radio Free Europe service.[2] In 1954, Secretary of the Air Force Harold E. Talbott sought out DeMille for help in designing the cadet uniforms at the newly established United States Air Force Academy. DeMille's designs—most notably his design of the distinctive cadet parade uniform—won praise from Air Force and Academy leadership, were ultimately adopted, and are still worn by cadets today.[3]

Near the end of his life, DeMille began pre-production work on a film biography of Robert Baden-Powell, 1st Baron Baden-Powell, the founder of the Scout Movement and had asked David Niven to star in the film; the film was never made. Because of illness, he asked his son-in-law, actor Anthony Quinn, to direct a remake of his 1938 film The Buccaneer; although DeMille served as executive producer, he was very unhappy with Quinn's work and tried unsuccessfully to remedy the situation. Despite a good cast led by Charlton Heston and Yul Brynner and some impressive battle scenes, the film was a disappointment. 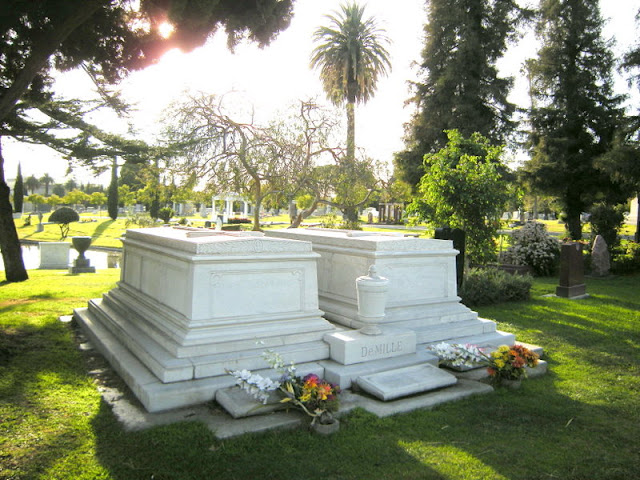 DeMille married Constance Adams on August 16, 1902 and had one child, Cecilia. The couple adopted Katherine Lester in the early 1920s; her father had been killed in World War I and her mother had died of tuberculosis. Katherine married Anthony Quinn. They also adopted two sons, John and Richard, the latter of whom became a notable filmmaker, author, and psychologist.
During on-location filming in Egypt of the Exodus sequence for 1956's The Ten Commandments, the then 73 year-old DeMille climbed a 107-foot ladder to the top of the massive Per Rameses set and suffered a near-fatal heart attack. Aided by his daughter Cecilia, but against his doctor's orders, he was back directing the film within a week.

He died from heart failure in January 1959 and was entombed in Hollywood Memorial Cemetery (now known as Hollywood Forever Cemetery). At the time of his death, he was planning to direct a movie about space travel. 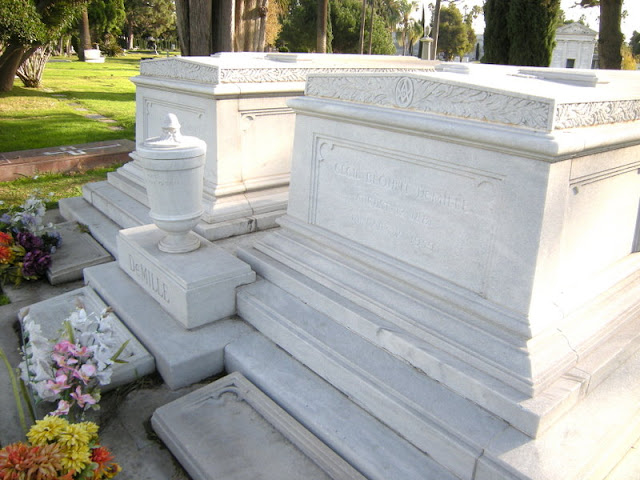 The former film building at Chapman University in Orange, California is named in honor of DeMille. The Lawrence and Kristina Dodge College of Film and Media Arts now resides in Marion Knotts Studios.

Middle school named after him Cecil B. DeMille In Long Beach, Ca. 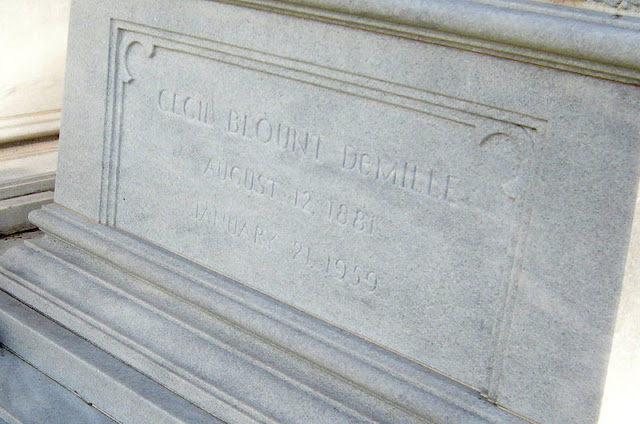 
Filmography (appearing as himself) 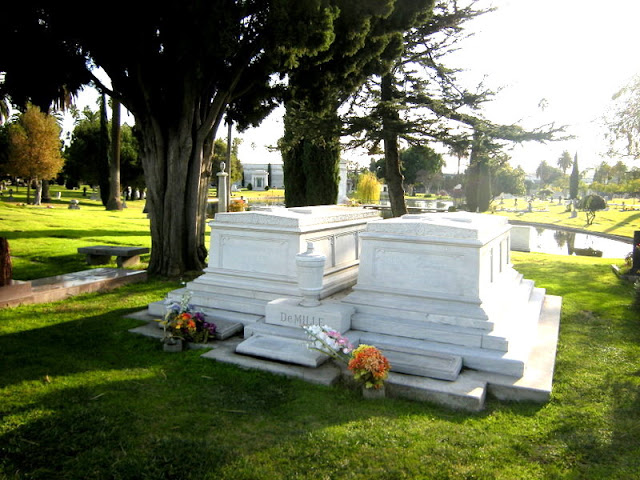