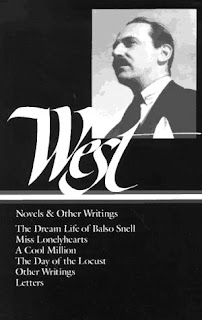 Nathanael West (born Nathan Wallenstein Weinstein) was born in New York City, the first child of German-speaking Russian Jewish parents from Lithuania who maintained an upper middle class household in a Jewish neighborhood on the Upper West Side. West displayed little ambition in academics, dropping out of high school and only gaining admission into Tufts University by forging his high school transcript. After being expelled from Tufts, West got into Brown University by appropriating the transcript of a fellow Tufts student who was also named Nathan Weinstein. Although West did little schoolwork at Brown, he read extensively. He ignored the realist fiction of his American contemporaries in favor of French surrealists and British and Irish poets of the 1890s, in particular Oscar Wilde. West's interests focused on unusual literary style as well as unusual content. He became interested in Christianity and mysticism, as experienced or expressed through literature and art. West's classmates at Brown ironically nicknamed him "Pep" after a school trip where after only a few minutes of walking he quickly ran out of breath. West himself acknowledged and made fun of his lack of physical prowess in recounting the story of a baseball match where he cost his team the game. Wells Root, a close friend of West, remembers hearing this tale half a dozen times, recalling that everyone had placed bets on the game, which came down to the final inning with the score tied and the enemy at bat with two outs. At that point the batter hit a long fly towards West:

He put his hands up to catch it and for some inexplicable reason didn’t hold them close together. The ball tore through, hit him in the forehead, and bounced into some brush. There was a roar from the crowd and [West] took one look and turned tail. To a man, the crowd had risen, gathered bats, sticks, stones, and anything they could lay hands on and were in hot pursuit. He vanished into some woods and didn’t emerge until nightfall. In telling the story he was convinced that if they had caught him they would have killed him.[2]

It is unclear whether this ever actually happened, but West later re-imagined this in his short story "Western Union Boy." Since Jewish students were not allowed to join fraternities, his main friend was his future brother-in-law S. J. Perelman, who was to become one of America's most erudite comic writers. West barely finished at Brown with a degree. He then went to Paris for three months, and it was at this point that he changed his name to Nathanael West. West's family, who had supported him thus far, ran into financial difficulties in the late 1920s. West returned home and worked sporadically in construction for his father, eventually finding a job as the night manager of the Hotel Kenmore Hall on East 23rd Street in Manhattan. One of West's real-life experiences at the hotel inspired the incident between Romola Martin and Homer Simpson that would later appear in The Day of the Locust (1939).

Although West had been working on his writing since college, it was not until his quiet night job at the hotel that he found the time to put his novel together. It was at this time that West wrote what would eventually become Miss Lonelyhearts (1933). In 1931, however, two years before he completed Miss Lonelyhearts, West published The Dream Life of Balso Snell, a novel he had conceived of in college. By this time, West was within a group of writers working in and around New York that included William Carlos Williams and Dashiell Hammett.

In 1933, West bought a farm in eastern Pennsylvania but soon got a job as a contract scriptwriter for Columbia Pictures and moved to Hollywood. He published a third novel, A Cool Million, in 1934. None of West's three works sold well, however, so he spent the mid-1930s in financial difficulty, sporadically collaborating on screenplays. Many of the films he worked on were B-movies, such as Five Came Back (1939). It was at this time that West wrote The Day of the Locust. West took many of the settings and minor characters of his novel directly from his experience living in a hotel on Hollywood Boulevard. 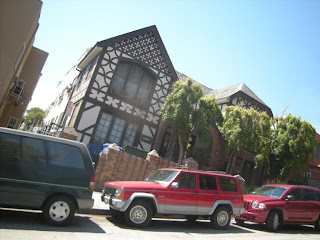 In November 1939, West was hired as a screenwriter by RKO Radio Pictures, where he collaborated with Boris Ingster on a film adaptation of the novel Before the Fact (1932) by Francis Iles. West and Ingster wrote the screenplay in seven weeks, with West focusing on characterization and dialogue and Ingster focusing on the narrative structure. RKO assigned the film, eventually released as Suspicion (1941), to Alfred Hitchcock; but Hitchcock already had his own, substantially different, screenplay. Hitchcock's screenplay was written by Samson Raphaelson, Joan Harrison (Hitchcock's secretary), and Alma Reville (Hitchcock's wife). West and Ingster's screenplay was abandoned, but the text can be found in the Library of America's edition of West's collected works.

On December 22, 1940, West and his wife Eileen McKenney were returning to Los Angeles from a hunting trip in Mexico to attend the funeral of his friend, F. Scott Fitzgerald, when he ran a stop sign in El Centro, California, resulting in an accident in which he and McKenney were killed. McKenney had been the inspiration for the title character in the play My Sister Eileen, and she and West had been scheduled to fly to New York City for the Broadway opening on December 26.[3] West was buried in Mount Zion Cemetery in Queens, New York, with his wife's ashes placed in his coffin.

Although West was not widely known during his life, his reputation grew after his death, especially with the publication of his collected novels by New Directions in 1957. Miss Lonelyhearts is widely regarded as West's masterpiece. The Day of the Locust still stands as one of the best novels written about the early years of Hollywood. It is often compared to F. Scott Fitzgerald's unfinished novel, The Last Tycoon, written at about the same time and also set in Hollywood. If one were to draw a family tree of authors who employed "black humor" in their works of fiction, West could be seen as the offspring of Gogol and Poe, and the progenitor of Saul Bellow, Vladimir Nabokov, and Martin Amis (whose use of movingly inarticulate e-mails in Yellow Dog is a 21st-century echo of the letters to Miss Lonelyhearts). A more direct and pronounced influence has been traced from West's work to that of his near-contemporary, Flannery O'Connor.

Some of West's fiction is seen as a response to the Depression that hit America with the stock market crash in October 1929 and continued throughout the 1930s. The obscene, garish landscapes of The Day of the Locust gain added force in light of the fact that the remainder of the country was living in drab poverty at the time. Though West attended socialist rallies in New York's Union Square, his novels have no affinity to the novels of his contemporary activist writers such as John Steinbeck and John Dos Passos. West’s writing style does not allow the portrayal of positive political causes, as he admitted in a letter to Malcolm Cowley regarding The Day of the Locust: "I tried to describe a meeting of the anti-Nazi league, but it didn’t fit and I had to substitute a whorehouse and a dirty film."[4] West saw the American dream as having been betrayed, both spiritually and materially, and in his writing he presented "a sweeping rejection of political causes, religious faith, artistic redemption and romantic love."[5] This idea of the corrupt American dream endured long after his death, in the form of the term "West's disease", coined by the poet W. H. Auden to refer to poverty that exists in both a spiritual and economic sense. Jay Martin wrote an extensive biography of West in 1971; a new biography of West and McKenney by Marion Meade was published by Houghton Mifflin Harcourt in 2010.