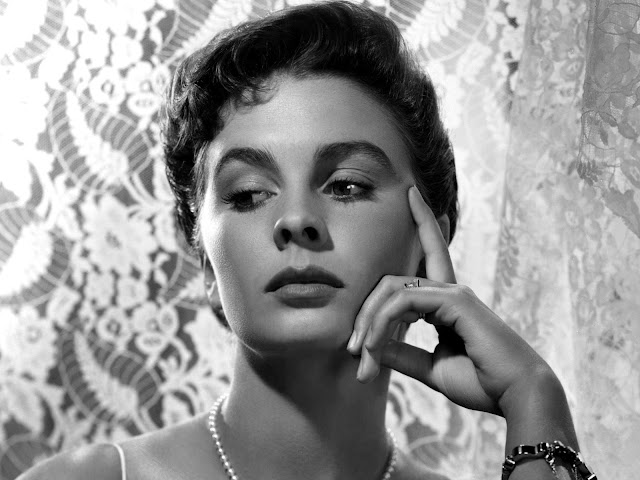 Jean Merilyn Simmons, OBE (January 31, 1929 – January 22, 2010) was a British actress.[1][2] One of J. Arthur Rank's "well-spoken young starlets," she appeared predominantly in films, beginning with those made in Great Britain during and after the Second World War, followed mainly by Hollywood films from 1950 onwards.[3] 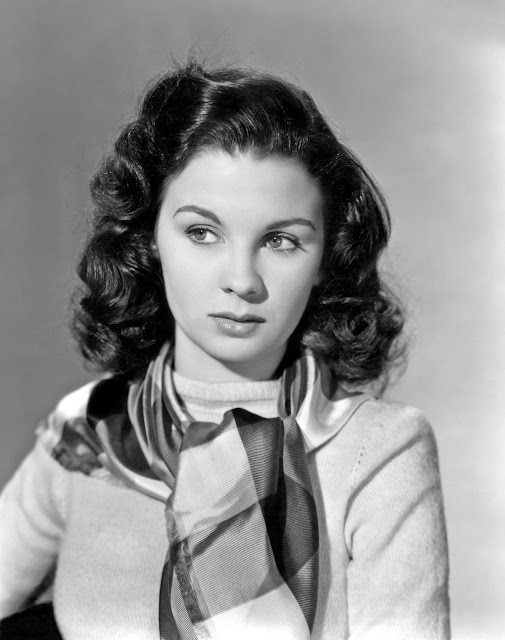 Simmons was born in Lower Holloway, London, to Charles Simmons, a bronze medalist in gymnastics at the 1912 Summer Olympics, and his wife, Winifred (née Loveland) Simmons. Jean was the youngest of four children with siblings Edna, Harold and Lorna. She began acting at the age of 14.[4] During the Second World War, the Simmons family was evacuated to Winscombe, Somerset.[5] Her father, a physical education teacher,[6] taught briefly at Sidcot School, and some time during this period Simmons followed her elder sister on to the village stage and sang songs such as "Daddy Wouldn't Buy Me a Bow Wow." Returning to London and just enrolled at the Aida Foster School of Dance, Simmons was spotted by the director Val Guest, who cast her in the Margaret Lockwood vehicle Give Us the Moon.[7] 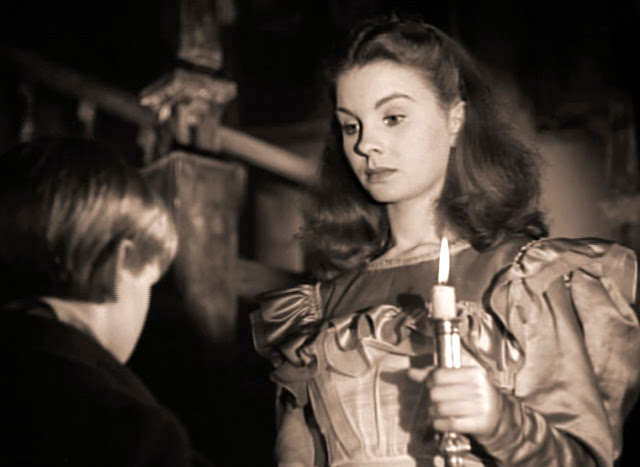 Small roles in several other films followed including the high profile Caesar and Cleopatra, produced by Gabriel Pascal. Pascal saw potential in Simmons and in 1945 he signed her to a seven-year contract. Prior to moving to Hollywood, she played the young Estella in David Lean's version of Great Expectations (1946) and Ophelia in Laurence Olivier's Hamlet (1948), for which she received her first Oscar nomination. 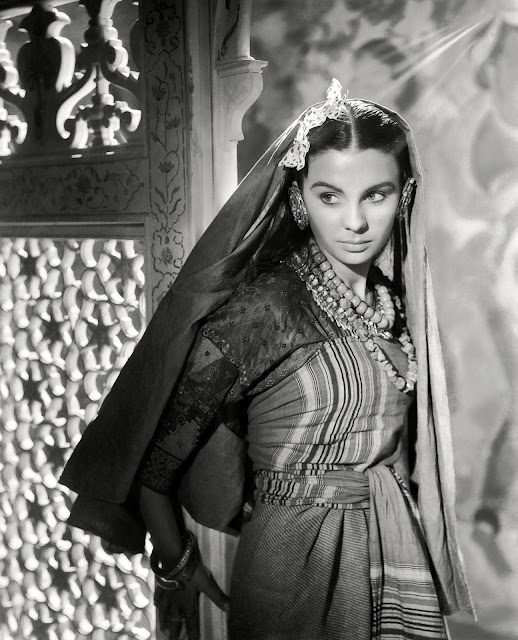 She played an Indian girl in the Powell-Pressburger film Black Narcissus (1947).[8]

It was the experience of working on Great Expectations that caused her to pursue an acting career more seriously:

I thought acting was just a lark, meeting all those exciting movie stars, and getting £5 a day which was lovely because we needed the money. But I figured I'd just go off and get married and have children like my mother. It was working with David Lean that convinced me to go on.[9]

Playing Ophelia to Olivier's Hamlet made her a star while still in her teens, although she was already well known for her work in other British films, including her first starring role in the film adaptation of Uncle Silas, and Black Narcissus (both 1947). Olivier offered her the chance to work and study at the Bristol Old Vic, advising her to play anything they threw at her to get experience; she was under contract to the Rank Organisation who vetoed the idea.[10] In 1949 Simmons starred with Stewart Granger in Adam and Evelyne. In 1950 she was voted the fourth most popular star in Britain.[11] In 1951 Rank sold her contract to Howard Hughes,[12] who then owned the RKO Pictures.[13] 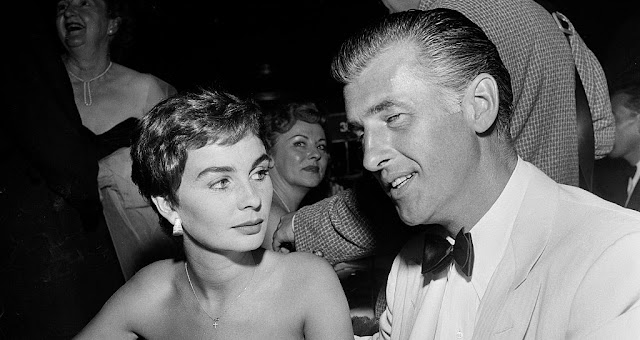 In 1950 she married Stewart Granger, with whom she appeared in several films, and the transition to an American career began. She made four films for Hughes, including Angel Face, directed by Otto Preminger. 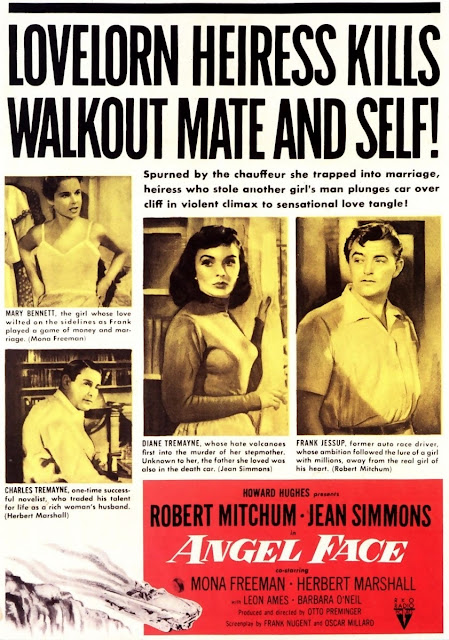 According to David Thomson "if she had made only one film – Angel Face – she might now be spoken of with the awe given to Louise Brooks."[14] A court case freed her from the contract with Hughes in 1952.[14] 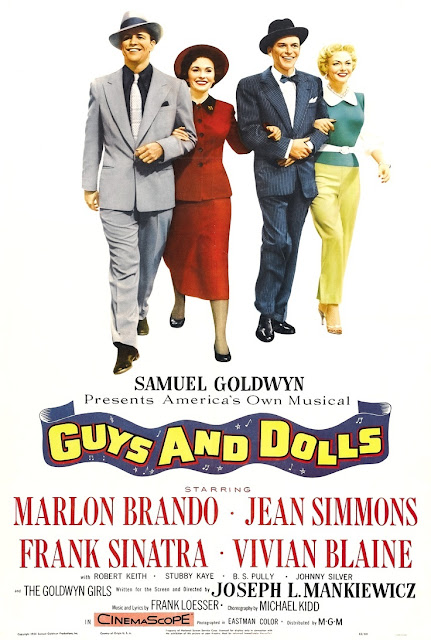 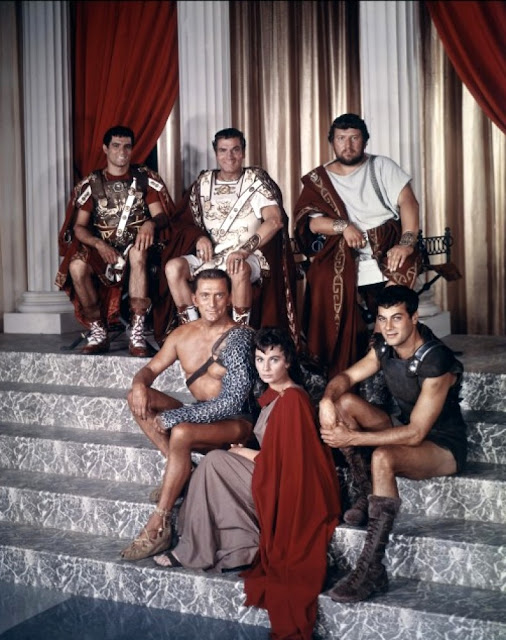 By the 1970s Simmons turned her focus to stage and television acting. She toured the United States in Stephen Sondheim's A Little Night Music, then took the show to London, and thus originated the role of Desirée Armfeldt in the West End. Performing in the show for three years, she said she never tired of Sondheim's music; "No matter how tired or off you felt, the music would just pick you up."[16] 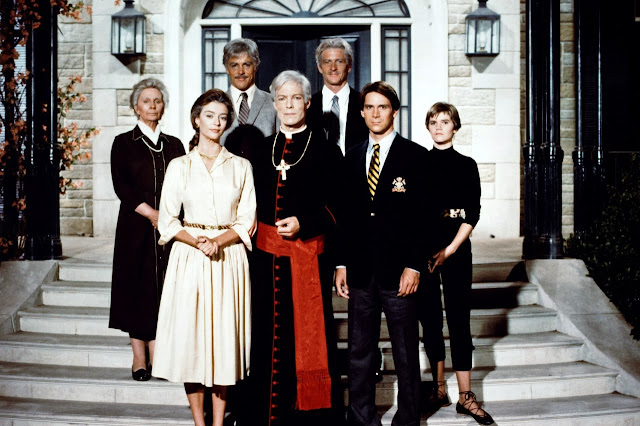 She portrayed Fiona "Fee" Cleary, the Cleary family matriarch, in the 1983 mini-series, The Thorn Birds; she won an Emmy Award for her role. In 1985-86 she appeared in North and South, again playing the role of the family matriarch as Clarissa Main. In 1988 she starred in The Dawning with Anthony Hopkins and Hugh Grant, and in 1989 she appeared in a remake of Great Expectations, in which she played the role of Miss Havisham, Estella's adoptive mother.[8]

She made a late career appearance in the Star Trek: The Next Generation episode "The Drumhead" (1991) as a retired Starfleet admiral and hardened legal investigator who conducts a witch-hunt. In 1991 she appeared in the short-lived revival of the 1960s daytime series Dark Shadows, in roles originally played by Joan Bennett. From 1994 until 1998 Simmons narrated the A and E documentary television series, Mysteries of the Bible. In 2004 Simmons voiced the lead-role of Sophie in the English dub of Howl's Moving Castle.[8] 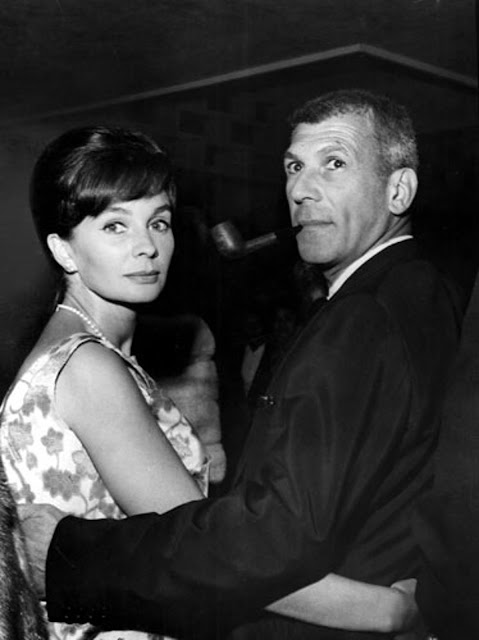 On 1 November 1960, she married director Richard Brooks;[20] they divorced in 1980.[21] Although both men were significantly older than Simmons, she denied she was looking for a father figure. Her father had died when she was just 16 but she said: "They were really nothing like my father at all. My father was a gentle, softly-spoken man. My husbands were much noisier and much more opinionated ... it's really nothing to do with age ... it's to do with what's there – the twinkle and sense of humour."[9] And in a 1984 interview, given in Copenhagen at the time she was shooting the film Yellow Pages, she elaborated slightly on her marriages, stating,

It may be simplistic, but you could sum up my two marriages by saying that, when I wanted to be a wife, Jimmy (Stewart Granger) would say: "I just want you to be pretty." And when I wanted to cook, Richard would say: "Forget the cooking. You've been trained to act – so act!" Most people thought I was helpless – a clinger and a butterfly – during my first marriage. It was Richard Brooks who saw what was wrong and tried to make me stand on my own two feet. I'd whine: 'I'm afraid.' And he'd say: 'Never be afraid to fail. Every time you get up in the morning, you are ahead.'

She had two daughters, Tracy Granger and Kate Brooks, one by each marriage – their names bearing witness to Simmons' friendship with Spencer Tracy[22] and Katharine Hepburn. Simmons moved to the East Coast in the late 1970s, briefly owning a home in New Milford, Connecticut. Later she returned to California, settling in Santa Monica, where she lived until her death. 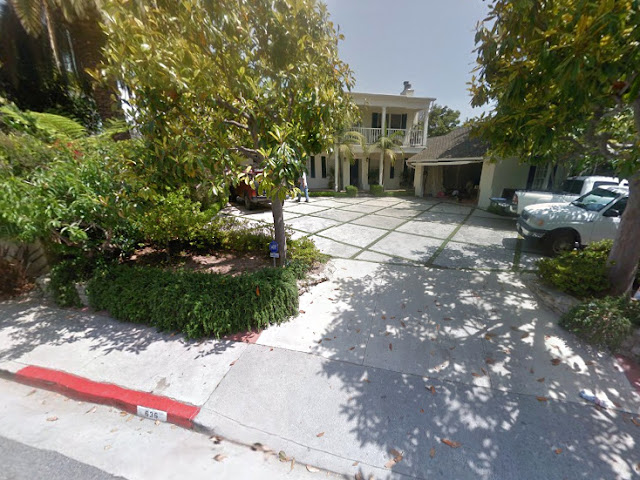 Throughout her life Simmons spoke out publicly about her struggle with addiction, and in 2003 became the patron of the British drugs and human rights charity Release. She was an active supporter of their campaigns for just, humane and effective drug policies, recognising that many of those with drug problems cannot afford the luxurious facilities available to celebrities. In 2005 she signed a petition to the British Prime Minister Tony Blair asking him not to upgrade cannabis from a class C drug to a class B.[26] 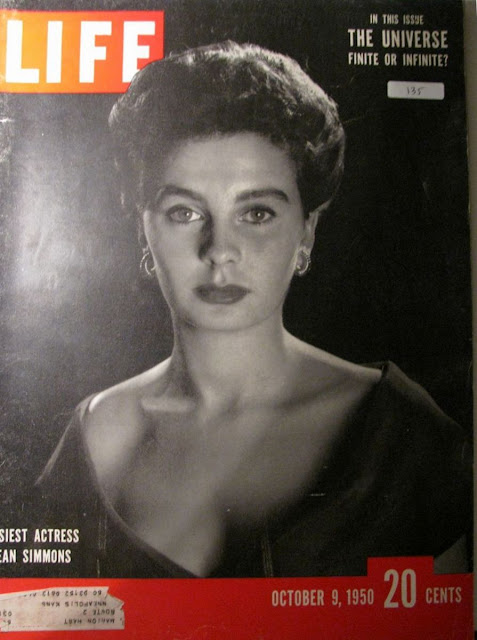 For a number of years, British film exhibitors voted her among the top ten British stars at the box office via an annual poll in the Motion Picture Herald. 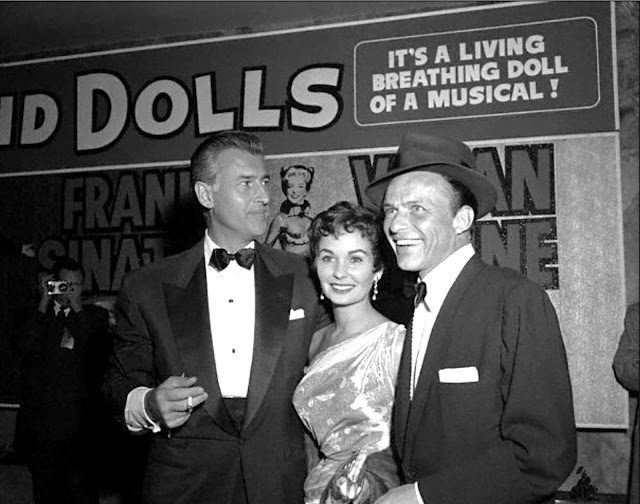