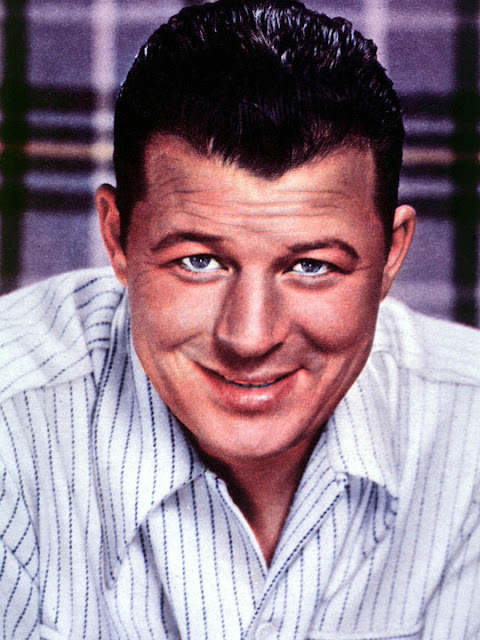 John Elmer "Jack" Carson (October 27, 1910 – January 2, 1963) was a Canadian-born American-based film actor.[1] Carson was one of the most popular character actors during the "golden age of Hollywood," with a film career spanning the 1930s, '40s and '50s. Though he was primarily used in supporting roles for comic relief, his work in films such as Mildred Pierce (1945) and Cat on a Hot Tin Roof (1958) displayed his mastery of "straight" dramatic actor roles as well. He worked for RKO and MGM (cast opposite Myrna Loy and William Powell in Love Crazy), but most of his memorable work was for Warner Brothers. His trademark character was the wisecracking know-it-all, typically and inevitably undone by his own smug cockiness. 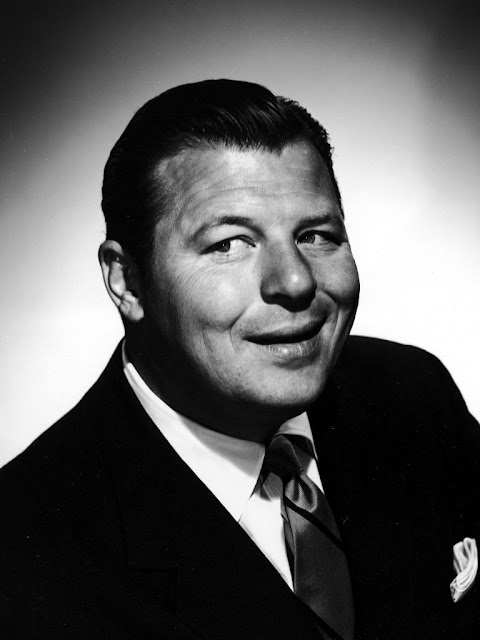 He was born in Carman, Manitoba, to Elmer and Elsa Carson. In 1914, the family moved to Milwaukee, Wisconsin, which he always thought of as his home town. He attended high school at Hartford School, Milwaukee, and St. John's Military Academy, Delafield, but it was at Carleton College that he acquired a taste for acting. Carson became a U.S. citizen in California in 1949.

Because of his size — 6 ft 2 in (1.9 m) and 220 lb (100 kg), his first stage appearance (in a collegiate production) was as Hercules. In the midst of a performance, he tripped and took half the set with him. A college friend, Dave Willock, thought it was so funny he persuaded Carson to team with him in a vaudeville act — Willock and Carson — and a new career was born. This piece of unplanned business would be typical of the sorts of things that tended to happen to Carson in many of his film roles.

During the 1930s, as vaudeville declined from increased competition from radio and the movies, Willock and Carson sought work in Hollywood. Carson initially landed bit roles at RKO Radio Pictures in films such as Bringing Up Baby (1938), starring Cary Grant and Katharine Hepburn. Radio was another source of employment for the team, starting with a 1938 appearance on the Kraft Music Hall when Bing Crosby hosted the show. This led to a number of other appearances culminating in Carson's own radio show in 1943.

From 1950-51, Jack was one of four alternating weekly hosts of the Wednesday evening NBC Television comedy-variety show Four Star Revue. (The others were veterans Jimmy Durante and Ed Wynn, and up-and-coming young Danny Thomas.) The second season was his last with the show, when it was renamed All Star Revue. 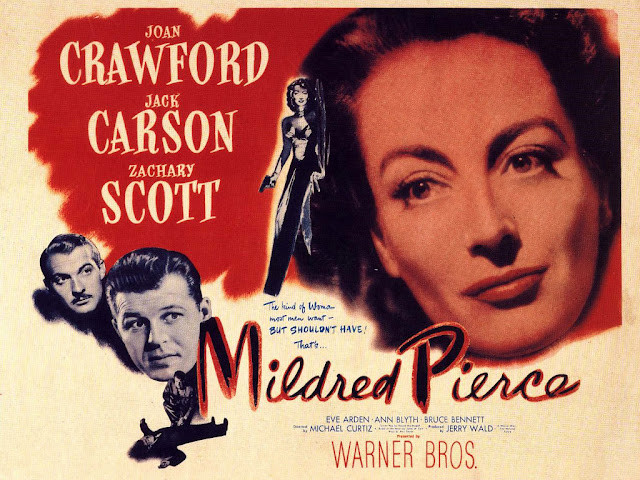 His success in radio led to the start of a lucrative film career. An early standout role for Carson was as a mock-drunk undercover G-Man opposite Richard Cromwell in Universal Pictures's anti-Nazi action drama entitled Enemy Agent. This led to contract-player status with Warner Brothers shortly thereafter. While there, he was teamed with Dennis Morgan in a number of films, supposedly to compete with the popular Bing Crosby - Bob Hope "Road to …" pictures. 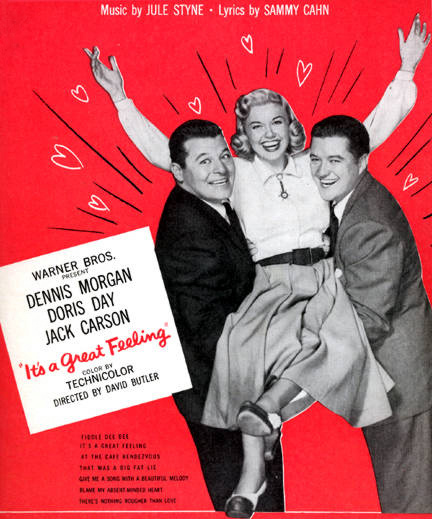 Most of his work at Warner Brothers was limited to light comedy work with Morgan, and later Doris Day (who in her autobiography would credit Carson as one of her early Hollywood mentors). 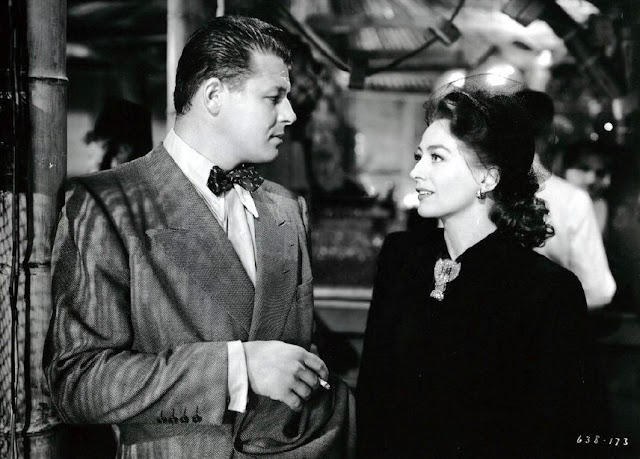 Critics generally agree that Carson's best work was in Mildred Pierce (1945), where he played the perpetually scheming Wally Fay opposite Joan Crawford in the title role. Also in 1945 he played the role of Harold Pierson, the second husband of Louise Randall, played by Rosalind Russell, in Roughly Speaking. 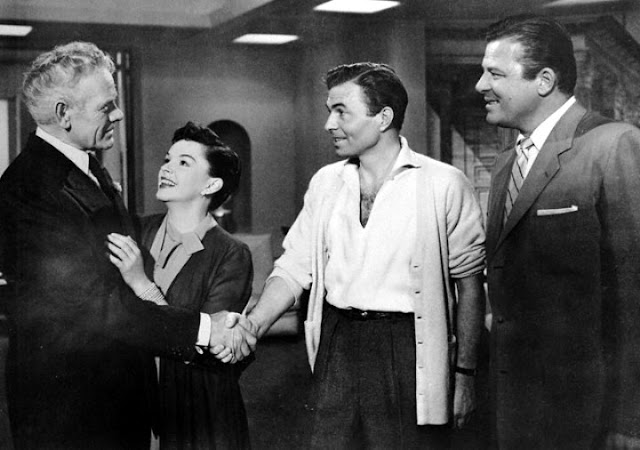 Another role which won accolades for him was as publicist Matt Libby in A Star is Born (1954). 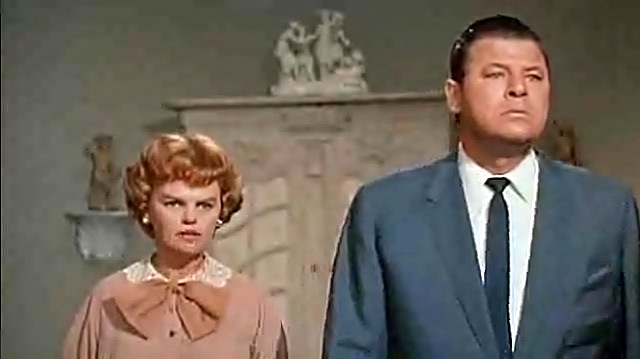 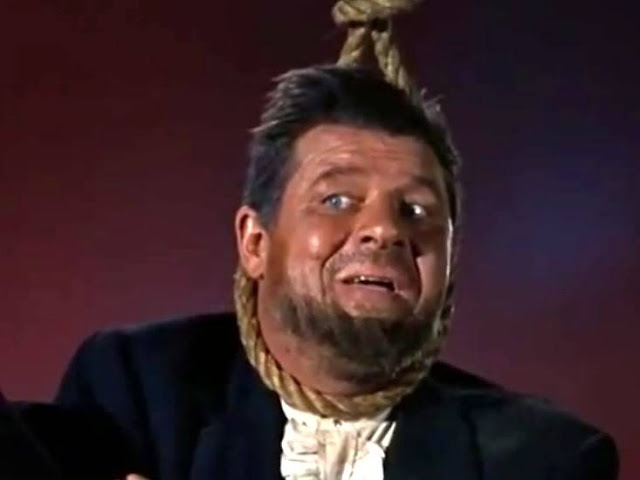 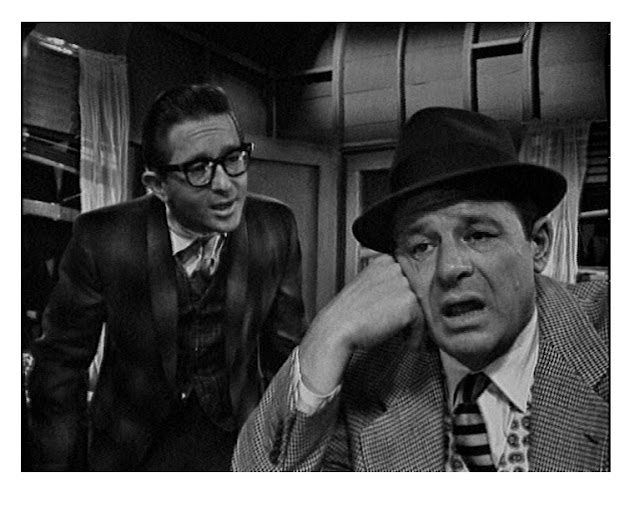 His TV pilot, Kentucky Kid, was under consideration as a potential series for NBC, but was not picked up by the network. The proposed series would have had Carson playing a veterinarian widower who raises horses and has an adopted Chinese child.

His far-less-famous brother Robert (Bob) was also a character actor.

In 1983, after his death, Jack Carson was inducted into the Wisconsin Performing Artists Hall of Fame along with his film pal, Dennis Morgan, who was also from Wisconsin. [2] 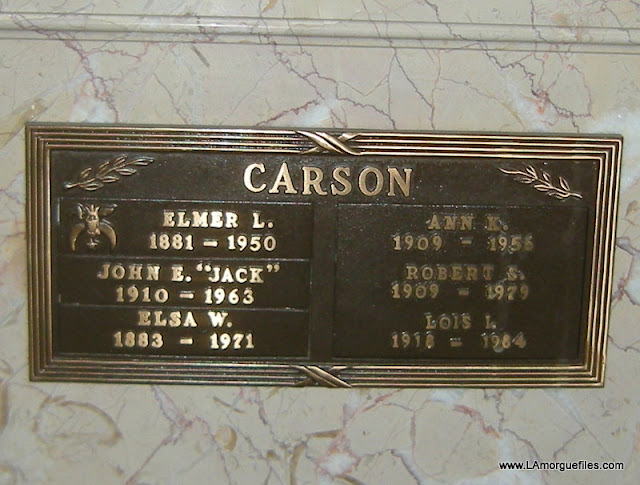 In 1962, while rehearsing the Broadway play Critic's Choice, he collapsed and was subsequently diagnosed with stomach cancer. He died in Encino in 1963, at 52 years of age. The early death of the burly Carson, whose screen image was one of energy and vitality, made front page news, along with the death of fellow actor Dick Powell, who died on the same day. Carson was entombed in Glendale's Forest Lawn Memorial Park Cemetery in The Great Mausoleum, Columbarium of Memory, 3rd Bay, niche 19676 with his parents, brother, and sisters. 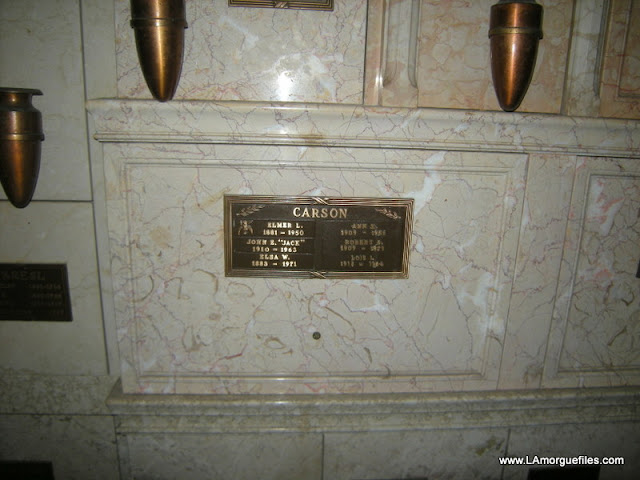 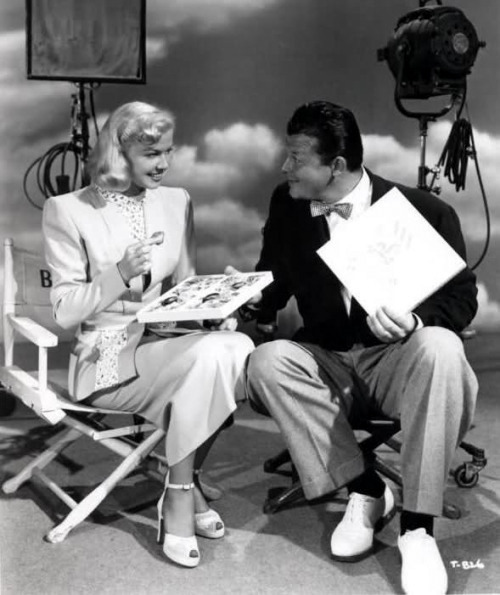 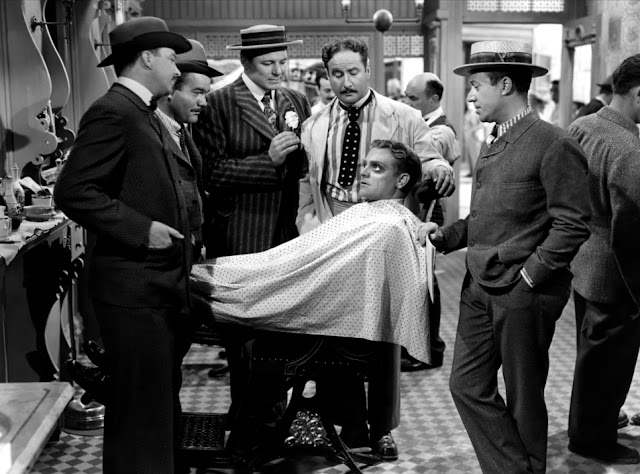 The Strawberry Blonde (1941) with James Cagney and Olivia de Havilland 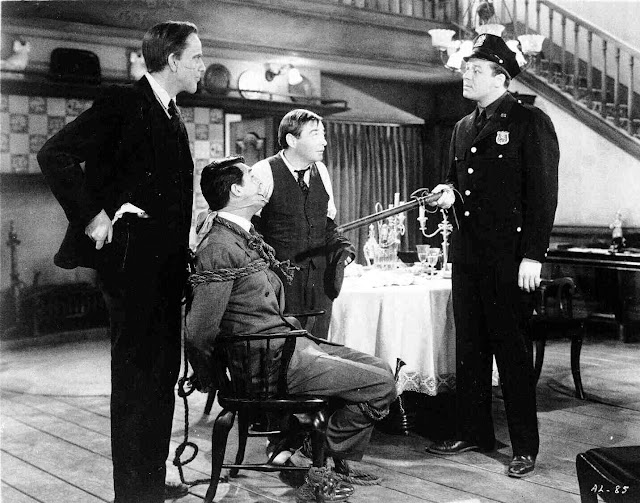 Arsenic and Old Lace (1944) with Cary Grant and Priscilla Lane 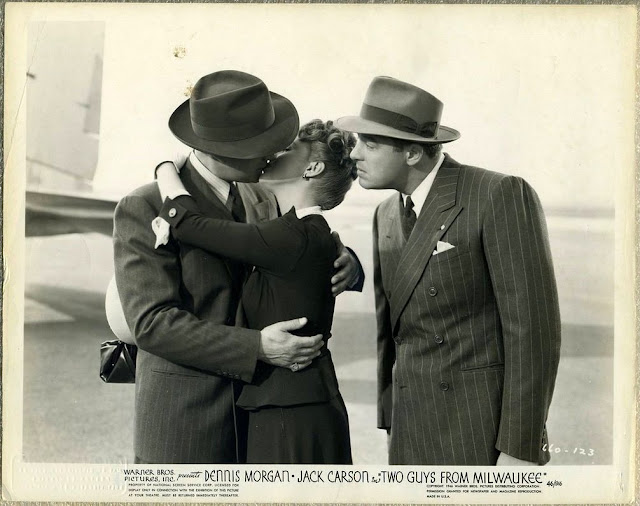 Love and Learn (1947) with Martha Vickers
April Showers (1948) with Ann Sothern
Romance on the High Seas (1948) with Janis Paige, Don DeFore, and Doris Day
Two Guys from Texas (1948) with Dennis Morgan and Dorothy Malone
April Showers (1948) with Ann Sothern
John Loves Mary (1949) with Ronald Reagan, Wayne Morris and Edward Arnold
My Dream Is Yours (1949) with Doris Day
It's a Great Feeling (1949) with Doris Day
Bright Leaf (1950) with Gary Cooper, and Lauren Bacall
The Good Humor Man (1950) with George Reeves, and Lola Albright
Mr. Universe (1951) with Vince Edwards
The Groom Wore Spurs (1951) with Ginger Rogers
Dangerous When Wet (1953) with Esther Williams and Fernando Lamas
A Star Is Born (1954) with Judy Garland and James Mason
Red Garters (1954) with Rosemary Clooney 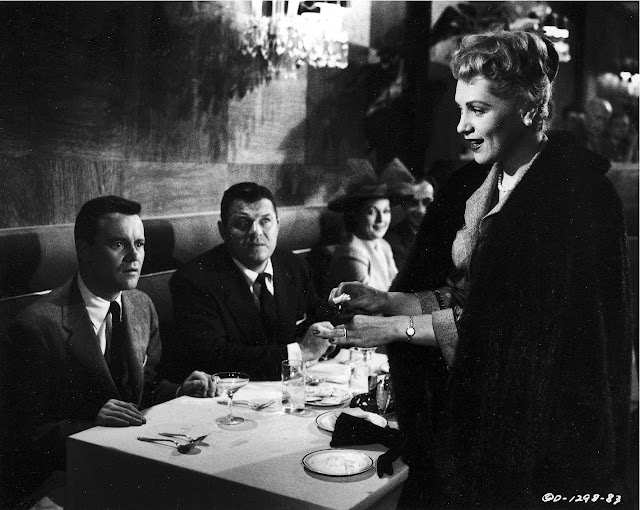 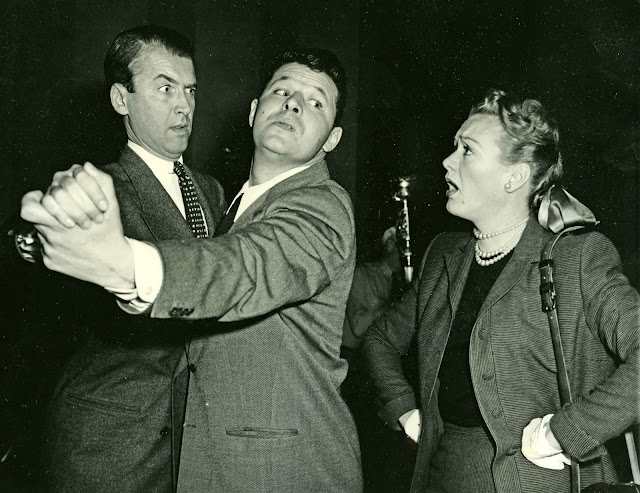