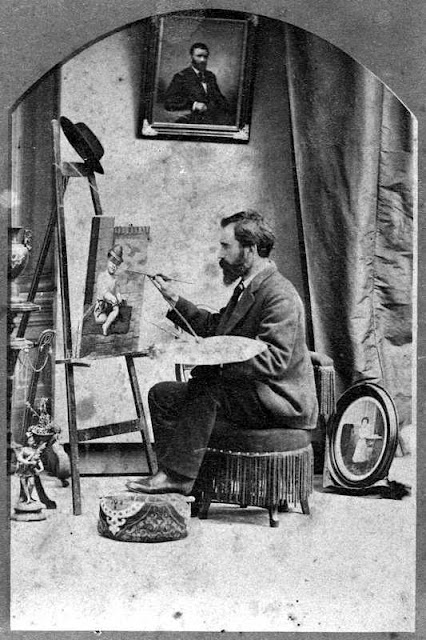 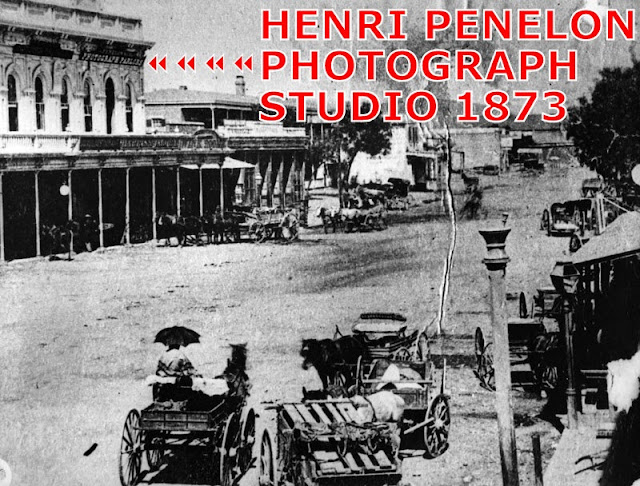 
While public display and exhibition for entertainment were the primary factors determining the production of both painted and photographic panoramas, other frontier artists turned their hand to photography just to survive. In California, the French artist Henri Penelon (c. 1827­-1879) exemplifies one of many artists turned photographer, who eked out an existence in new settlements bereft of much artistic life or cultural patronage. Penelon is particularly intriguing, for unlike many other foreigners drawn to San Francisco and northern California because of the gold rush, he settled after a very short time in San Francisco in Southern California, in what was then the village of Los Angeles. In 1853, when Penelon arrived, the Spanish­ Mexican town, newly acquired by the American government, had a population of about 4000 (the county about 10,000), with very little in the way of art patrons. Why Penelon decided to bring his talents here rather than join in the increasingly cultivated society up north is unclear, but he is consequently considered Los Angeles's first resident artist. He set up a studio near the town plaza, where he gained some employ ment as a portrait painter among the old Californio families. He also painted a fresco on the facade of the mission church on the plaza (the painting survived into the 1950s, when it was painted over). Penelon was French and Catholic, leading some writers to infer that he was more easily accepted by the Mexican Catholic Californian families that comprised Los Angeles society of the time. 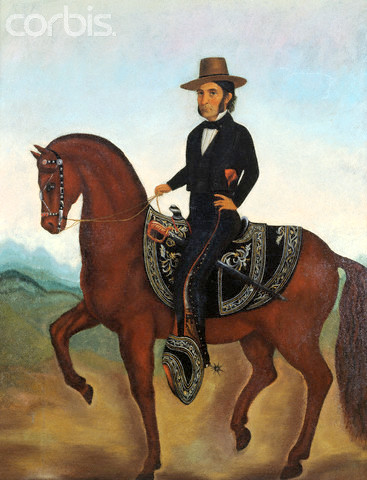 One of Penelon's best paintings is an equestrian portrait of Don Jose Sepulveda, owner of the enormous Rancho San Joaquin, which covered nearly all of what is today Orange County. Legend has it that in the painting Sepulveda sits astride his Australian mare, Black Swan, considered the first thoroughbred horse in California and the winner in 1852 of the most famous horse race in early Californian history. The painting shows Penelon to have had some knowledge of standard European artistic modes such as equestrian portraiture, but his execution was primitive enough that one doubts he had much, if any, professional training as an artist. As John Dewar remarks in the only essay on Penelon, "all of the Penelon paintings are painted thinly, also the mark of the self-taught artist." He continued nonetheless as an artist until the mid-60s, when, in April 1864, he began to advertise in the newspaper as "H. Penelon, Daguerrean Gallery," including as one of his offerings, Pictures in Oil Paint executed in the Best Style.  From this time, he seemed to carry out painting when he could find the clients, but increasingly depended on making photographs.

After 1870 Penelon worked almost entirely as a photographer, but still called himself in his advertisements and on his photographic cards "artist." His photographs, what few can now be identified, reveal the same kind of compositional modes as his portrait paintings do (although without the horse). Falling on hard times due to increased competition in the booming Los Angeles of the 1870s, Penelon, in partnership with another photographer, Dudley P. Flanders, set out with photographic equipment for the Arizona Territory. He was apparently forced by financial need back to the itinerant photographic trade. He died suddenly in Prescott and was buried there, leaving behind a wife and two daughters in Los Angeles.

Penelon had limited his peregrinations to adjoining territories after settling in Southern California even when forced by lack of patronage in the culturally deprived region to hit the road again.
http://academia.edu/3472472/Images_of_the_Pacific_Rim_Chapter_1_1850s_Artist-photographers_in_gold_country 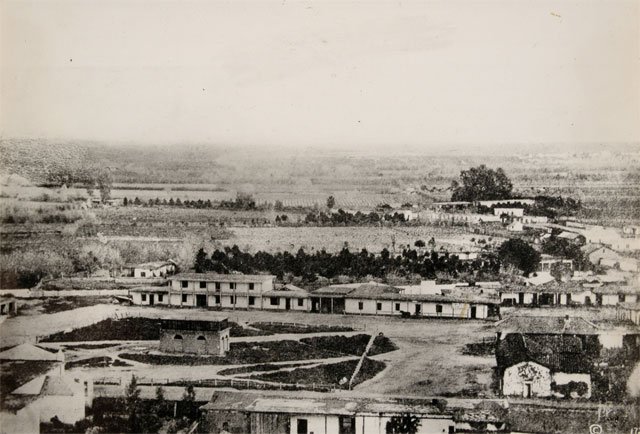 The Spanish and Mexican contribution to early Los Angeles is well documented in everything from place names to plazas. Far less well known is the part played by 19th century French immigrants, among them Henri Penelon, the city's first professional artist.

In fact, among all Los Angeles' French pioneer families--Vignes, Sainsevain and Viole--none was better known at the time and more quickly forgotten than Penelon.

More than a century before Los Angeles matured into a genuine art center, Penelon used photographs and oils to depict the city's history. His quiet career spanned more than two decades, during which he captured on canvas and in photographs Southern California's leading Mexican families.

That was all but forgotten until the 1950s, when Penelon's granddaughter walked into the Los Angeles Museum of Natural History with two of his paintings.

Although his surviving artwork in local museums gives little indication of formal training, the 28-year-old Penelon, who was born in Lyon, arrived in Los Angeles in 1853 and immediately set up shop as a "French" artist and photographer.

The sun-drenched pueblo already boasted three other amateur photographers and 200 French residents. Armed with the tools of his trade--a brush and lens--Penelon set up a gallery on the west side of Main Street, between 1st and 2nd streets. It was not far from where the early French settlers had planted their roots at Alameda and Commercial streets.

Eventually, he purchased more parcels of land with his Parisian friend and business partner Adrien Davaust. When Penelon wasn't painting, he helped take care of the sick and comforted people during bereavement and other hardships as one of the founders of the French Benevolent Society.

Penelon also began producing playing-card-sized prints from glass negatives. The craze for these had begun in France in 1854 and spread to the United States. The images were called cartes de visite, and people used them as calling cards to be handed to servants. The artist also did a big business in hand-painted photos. 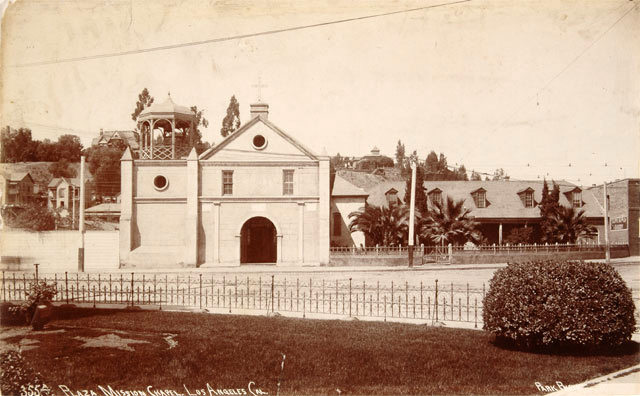 His first public exhibition opened in 1861, when the old Plaza church underwent a radical remodeling and Penelon added ornamental touches to La Placita's interior and exterior. On the front of the church above the door, he painted the madonna and child enthroned with angels, and then inscribed on the newly built brick wall: "Los Fieles de Esta Parroquia a la Reina de Los Angeles, 1861."

(Although most of his work at the church has vanished, some believe the ornately framed Stations of the Cross--currently on loan to a church in Mexico--were created by Penelon.)

Teaming up with Swedish photographer Valentin Wolfenstein--who had applied for a job with him a few years earlier and was turned down because he was too young and inexperienced--helped Penelon's career take off.

He was prosperous enough to marry Emilie Henriot, 25 years his junior, and they had a daughter, Hortense, and a son, Honore.

Penelon also continued to paint. Using a thin layer of paint (the mark of an unschooled artist), he produced what is probably his best known surviving painting, an idyllic scene of a swan and a rabbit. It is one of the few he signed ("H. Penelon 1871") and is on exhibit at the Natural History Museum's Seaver Center for Western History Research.

The pueblo's prominent Mexican families remained not only Penelon's best customers, but also his best friends. He spoke fluent Spanish, and they readily welcomed him into their society, calling him "Horatio" and "Honore."

Before Penelon died in 1874 in Prescott, Ariz., at age 49, he also produced embroidered saddles and grim-faced portraits of the pueblo's business-minded founders.

Today, Penelon seduces us into the past with his paintings of Jose Miguel Yndart, Antonio Maria Lugo, Vicente Lugo, Antonio Avila and Francisca Romero de Coronel, all on view at the Seaver Center, which holds 13 of Penelon's oil portraits. His artwork constitutes nothing less than the family album of a city that film would transform into a global visual powerhouse. *

Cecilia Rasmussen's new book, "L.A. Unconventional," a collection of stories about Los Angeles' unique and offbeat characters, is available at most bookstores or can be ordered by calling (800) 246-4042. The price of $30.95 includes shipping and sales tax. 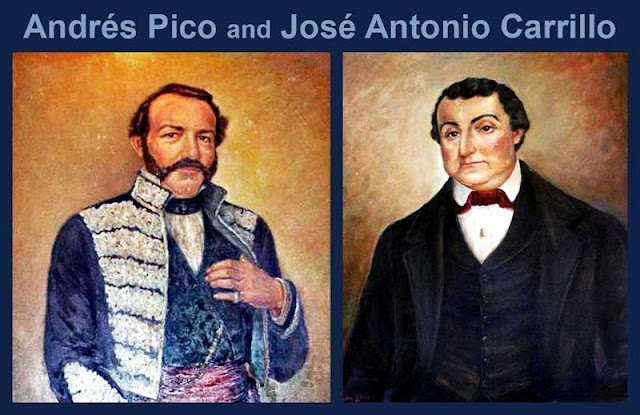