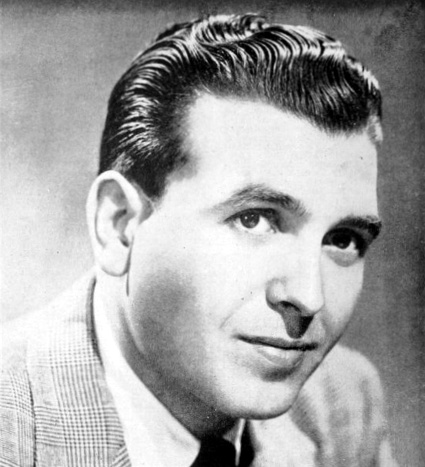 Dennis James (August 24, 1917 – June 3, 1997), born Demie James Sposa, was an American television personality, actor, and announcer. Up until 1976 he had appeared on TV more times and for a longer period than any other television star. He is credited as the host of television's first network game show, the DuMont Network's Cash and Carry (1946). James was also the first person to host a telethon (raising over $700,000,000 for United Cerebral Palsy throughout his career), the first to appear in a television commercial, first to emcee a variety show, and first to appear on video tape.[1][2] 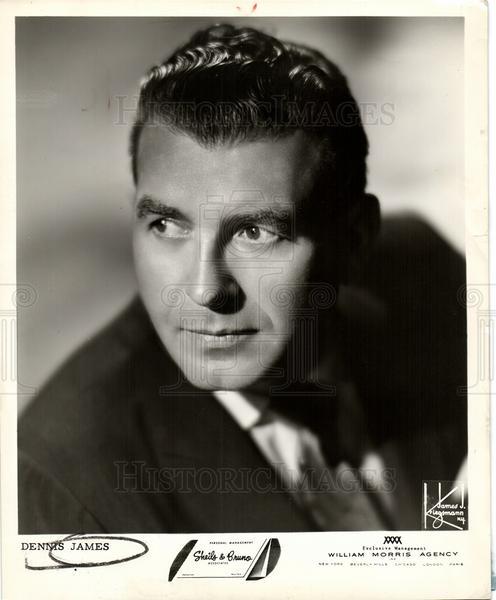 James was born to Demetrio Ernest Sposa and Teresa Amorosi, both of Italian descent.[3] Born in Jersey City, New Jersey, James began his career in radio with WNEW (now WBBR) and moved to television in 1938, working for the soon-to-become-DuMont Television Network station WABD, which helped to found the DuMont network in 1946 (WABD is now WNYW.) James became the host of game shows, such as the ABC version of Chance of a Lifetime (1952–53), and served as commentator for DuMont's wrestling and boxing shows, such as Boxing From Jamaica Arena (1948–49) and Amateur Boxing Fight Club (1949–50). He hosted the DuMont daytime variety show Okay, Mother (1948–51) with Julia Meade.

James often addressed the TV audience as "Mother," a practice he had begun when discussing the finer points of wrestling during his sports broadcasts.[4] He feared the men in the audience would be insulted by the implication that they didn't already know the rules (even if they didn't), but would accept that James was merely explaining things for the benefit of women viewers. 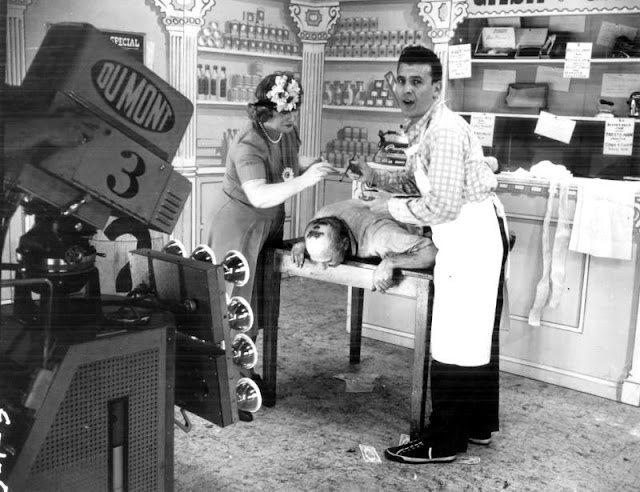 Known as the "Dean of Game Show Hosts," James started his game show hosting career with the first network game show, Cash and Carry on the Dumont network from 1946 to 1947. During the 1953–54 season, James was the announcer of the quiz program Judge for Yourself, which aired on NBC, with Fred Allen as the emcee.[5]

In 1956, he and Bert Parks hosted the ABC musical game show Stop the Music.[6] In 1956, James emceed High Finance on CBS in which contestants answered current events questions to build up a jackpot for prizes.

James also appeared with Bill Leyden in the 1962–64 NBC quiz program Your First Impression. James's game show hosting duties spanned four decades, as he presided over shows such as The Name's the Same, Haggis Baggis, People Will Talk, and PDQ, and the talent shows Chance of a Lifetime and Your All-American College Show. James was the official commercial presenter of the one-episode You're in the Picture, and appeared on the subsequent "apology" episode as well. His last new game show hosting gig was the NBC daytime revival of Name That Tune (1974–75).

James was a regular substitute host for Monty Hall on Let's Make a Deal beginning in January 1972, when he caught the attention of Mark Goodson and Bill Todman, who was putting together The New Price Is Right for syndication; the new format would incorporate the original format from 1956–1965 with elements from Let's Make a Deal. James and Goodson co-hosted a promotional film, selling stations on the 1972 revival of the show, which was originally hosted by James's fellow TV pioneer Bill Cullen. CBS (at the time re-entering the game show market after four years without any) agreed to pick up a daytime version of the show, but only if James was axed and Truth or Consequences host Bob Barker was hired. After some negotiation, Barker took the daytime show, which he hosted until 2007, while James hosted a weekly version for the syndicated market, the latter of which aired in the "access period" leading into prime time and was thus known as The Nighttime Price Is Right. James hosted the weekly show from 1972–77, and also filled in for Barker during four daytime episodes taped on December 2, 1974 and aired from December 24 to 27 of that year, becoming the only substitute host in the CBS version's history. (There have been two cases of substitutes since 2014, but in each case, they were part of April Fool's Day gags.) James's departure from the nighttime show in 1977 marked the end of his game show career. 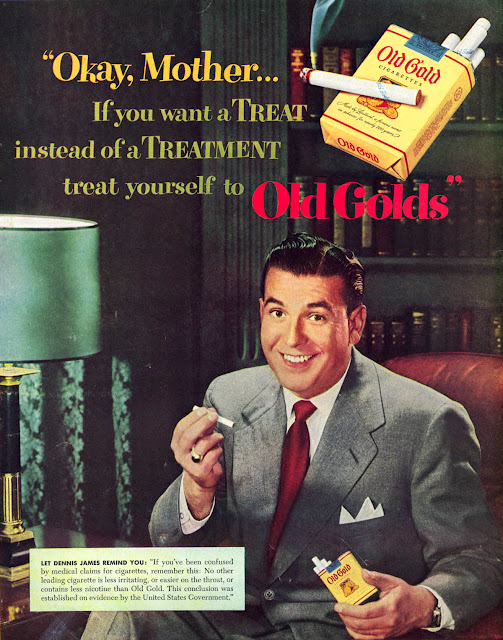 Outside of sports and game shows, James was also a commercial spokesman for products including Old Gold cigarettes, Kellogg's cereals and, through his own production company, local and regional companies and businesses. For nearly 30 years, James was the spokesman for Physicians Mutual Insurance Company until his death in 1997. His expression "Okay? Okay!" became a trademark in many of James's commercials. James's friend Andy Granatelli hired him to serve as the original commercial spokesperson for Tuneup Masters. 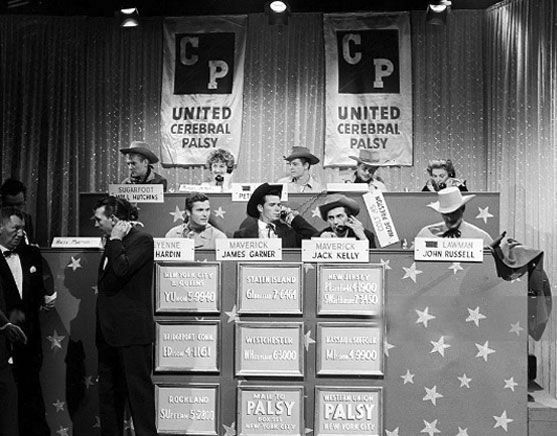 James hosted the first telethon using the then-new television medium to raise money for charity. James was the emcee of the United Cerebral Palsy Association's telethons. James hosted the charity's primary telethon (in New York City on WOR-TV (now WWOR-TV) for 47 years, aided by Jane Pickens, Paul Anka, Florence Henderson, and other performers. He also hosted telethons in major cities all over the United States on a monthly basis from 1950 until 1979. When the telethon went national in 1979 with John Ritter as M.C. in Los Angeles, UCP enlisted James as a national presenter, in addition to James's duties as the anchor of the New York City version, which was also seen on cable all over the U.S. via WOR-TV. His son Brad appeared on the telethons for over a decade, interviewing some of UCP's clients. When James died in 1997, Brad and Florence Henderson came back to host the telethon for the last time in January 1998. 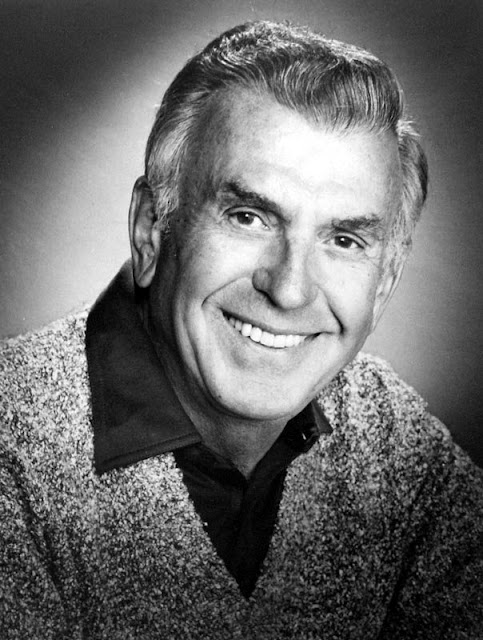 James bought a home in Palm Springs, California in 1980. He was then called on to host dozens of charity events a year in the Palm Springs area, including events for Childhelp International, the Frank Sinatra Golf Classic, and the Bob Hope Desert Classic. In 1996, a Golden Palm Star on the Walk of Stars was dedicated to him.[7]

For his contribution to the television industry, Dennis James has a star on the Hollywood Walk of Fame located at 6753 Hollywood Blvd.

United Cerebral Palsy's office in the Inland Empire is known as the Dennis James Center, and James in 1996 began organising a golf fundraiser near his home. His widow and children continue with the tournament, which is named in his honor, to this day. Fellow game show host Jack Narz's children and grandchildren are actively involved with the office and the James tournament. 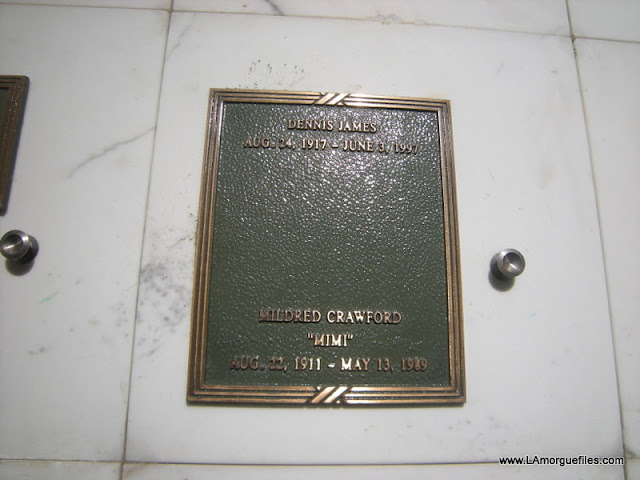 James died on June 3, 1997 from lung cancer at his home in Palm Springs.[2] His remains were interred at the Forest Lawn Memorial Park in Hollywood Hills, Los Angeles.[8] 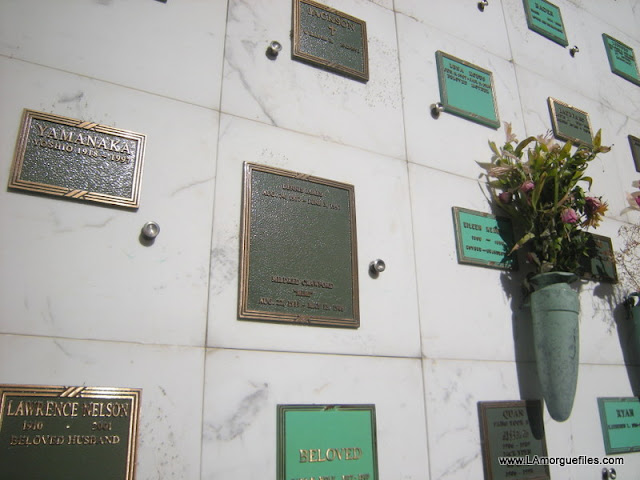 James is survived by his wife Micki, the former Marjorie Crawford and his sons, Dennis James Jr., an international law attorney; Brad James, a communications industry executive; and Randy James, a talent manager. 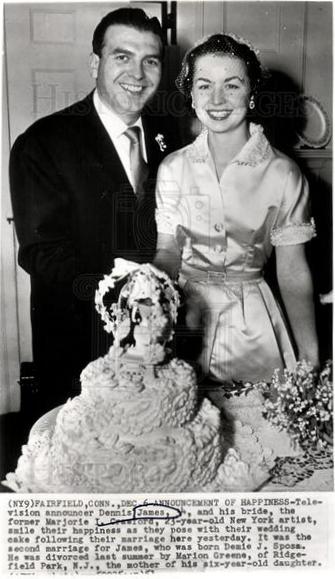 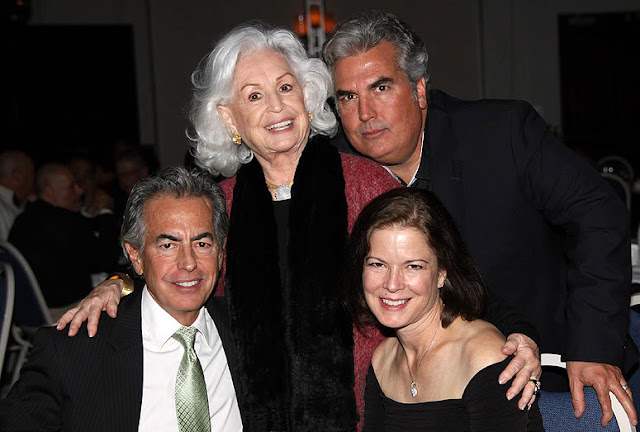