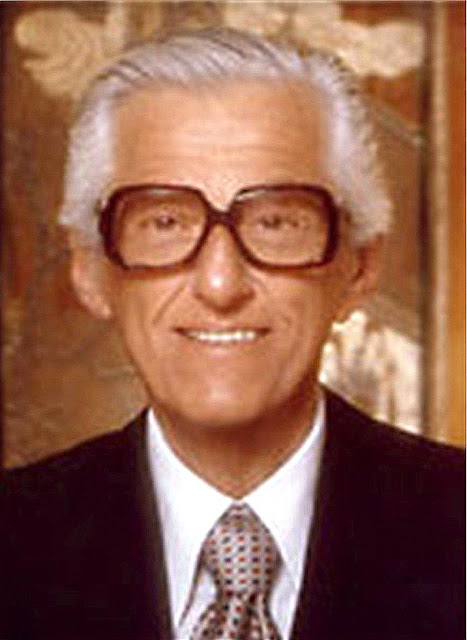 Lewis Robert "Lew" Wasserman (March 22, 1913 – June 3, 2002) was an American talent agent and studio executive, sometimes credited with creating and later taking apart the studio system in a career spanning more than six decades. He was also the manager of MCA. 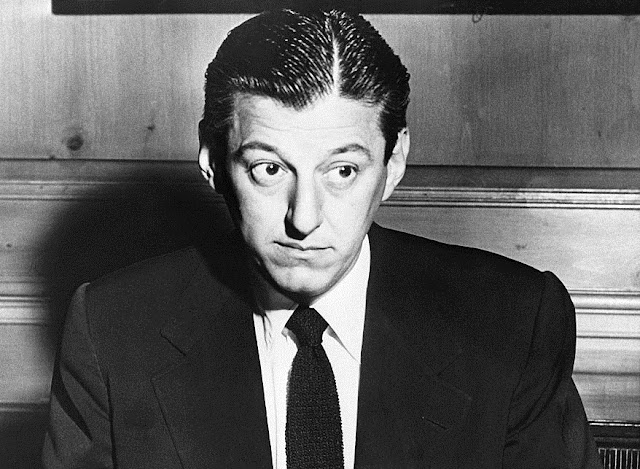 Wasserman was born to a Jewish family[1] in Cleveland, Ohio, the son of Isaac Wasserman and Minnie Chernick, both emigrants from Russia. He began his show business career as an usher in a Cleveland theater in 1933. He later became a booking agent for the Music Corporation of America (MCA), founded by Jules Stein.

Under Wasserman, MCA branched out into representing actors and actresses in addition to musicians and in the process created the star system, which drove up prices for studios. MCA was controlled by Mafia boss Al Capone until Capone's imprisonment in 1939 but remained controlled by the Chicago Outfit and struggled to gain ground in Hollywood since major agencies like those belonging to Charles Feldman, Myron Selznick, and Leland Hayward had already grabbed up most of the major talent. However, in the mid-1940s, when it purchased Hayward's agency, MCA finally gained bargaining leverage with the studios. As an agency, Wasserman's MCA came to dominate Hollywood, representing such stars as Bette Davis and Ronald Reagan. 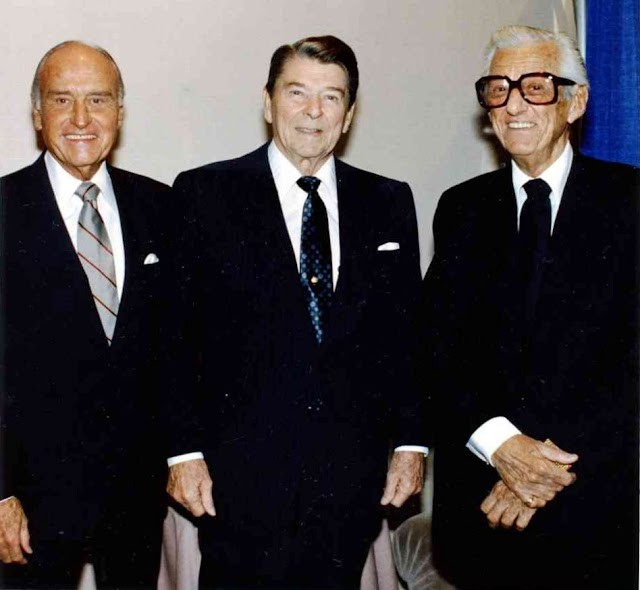 According to Dan E. Moldea's survey Dark Victory : Ronald Reagan, MCA, and the Mob (which inspired Clara and Julia Kuperberg's 1986 TV documentary), Wasserman was the link between the Mafia, the Hollywood film industry and Reagan, who obtained very lucrative deals as an actor with Wasserman as his agent. By 1947, just after Capone died, and still with the help of his alliance with the underworld, Wasserman was instrumental in helping Reagan to become president of the Screen Actors Guild, which kicked off Reagan's rise to power. Reagan allowed MCA to work both as a producer as well as an agent, which enabled the Mafia to earn a huge income. Wasserman remained close to Reagan and organized crime allegedly pushed Reagan's career within the Republican Party, obtaining many favors in return from the politician. According to Dan E. Moldea, Reagan was the Mafia's candidate and classified several organized crime cases right after he was elected president. 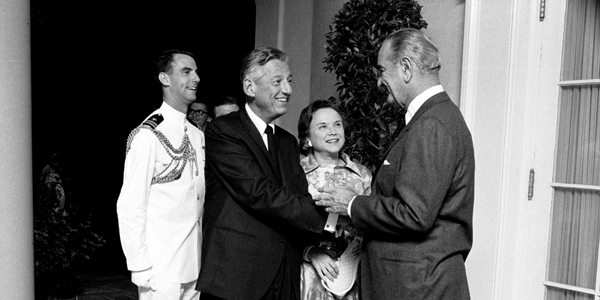 Wasserman was an influential player and fund-raiser in the Democratic Party,[2] but was also a lifelong and instrumental advocate, mentor, and close friend of Reagan. The Newsmeat Power Rankings identify Wasserman and his close friend Jack Valenti as two of the top five "most famous and powerful Americans whose campaign contributions result most often in victory."[3]

At MCA Wasserman expanded upon a business practice known as film packaging (something established by earlier agents like Feldman and Selznick). Since studios reduced output after World War II, they let more actors off of long-term contracts and big agencies like MCA could negotiate stronger terms for their clients. Agents like Wasserman would pitch packages (say, a writer client, director client, and actor or actress) to the studios, who only needed to finance it. Agencies therefore began doing the job the studios used to in some respects – namely, assembling films.[citation needed]

Wasserman expanded on practices established by earlier agents. For example, Feldman and Selznick realized in the late 1930s that an actor could pay much less tax by turning himself into a corporation. The corporation, which would employ the actor, would own part of a motion picture the actor appeared in, and all monies would accrue to the corporation, which was taxed at a much lower rate than was personal income. 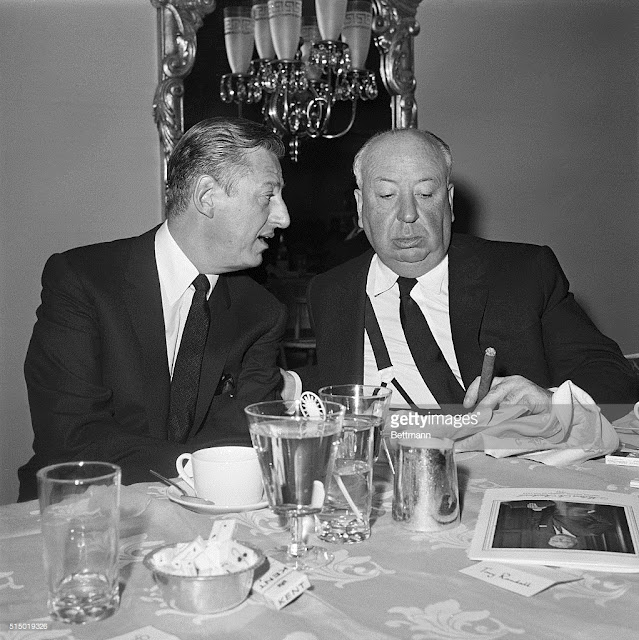 Wasserman used this tax avoidance scheme with actor James Stewart, beginning with the Anthony Mann western Winchester '73 (1950). This marked the first time an onscreen talent ever received "points in the film" – a business tactic that skyrocketed after Wasserman's negotiation and Stewart's ensuing success. 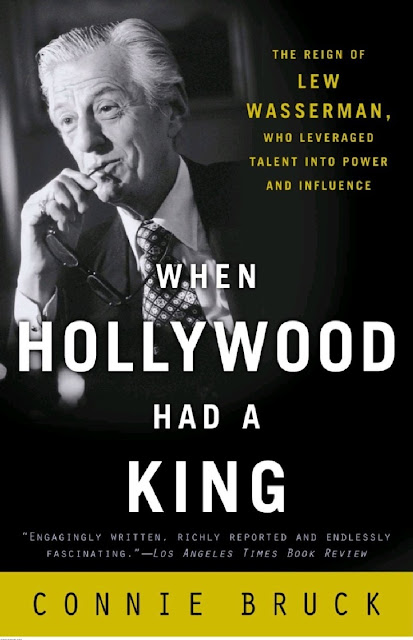 Following the rising postwar popularity of television and the resulting near bankruptcy of many studios, Wasserman purchased Universal Studios and Decca Records in 1962 and merged them with MCA. In 1966, he singlehandedly installed Jack Valenti as head of the Motion Picture Association of America (MPAA). Together they orchestrated and controlled much of how Hollywood operated, and was allowed to do business, for the next several decades. Wasserman ran the combined company for nearly 30 years before selling it to Japanese consumer electronics conglomerate Matsushita Electric in 1990. 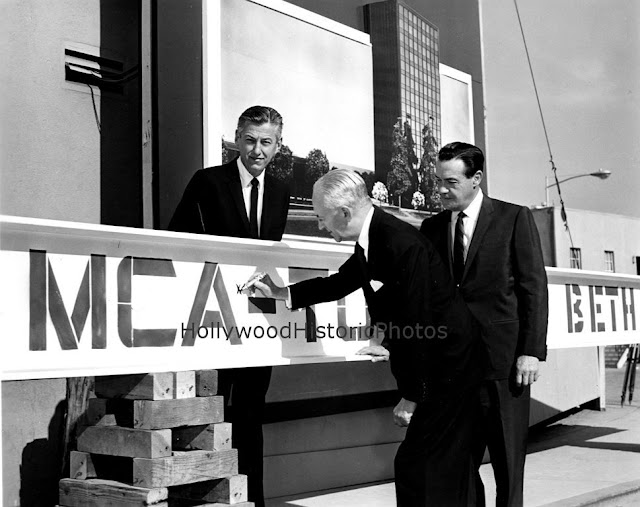 In 1993, Wasserman created Universal CityWalk and made numerous, substantial changes to the Universal City area. Wasserman pocketed an estimated $350 million from the sale of MCA and remained as manager, but with vastly diminished power and influence, until Seagram bought controlling interest in 1995, which then resulted in his role becoming even more marginalized. Wasserman served on the board of directors until 1998. 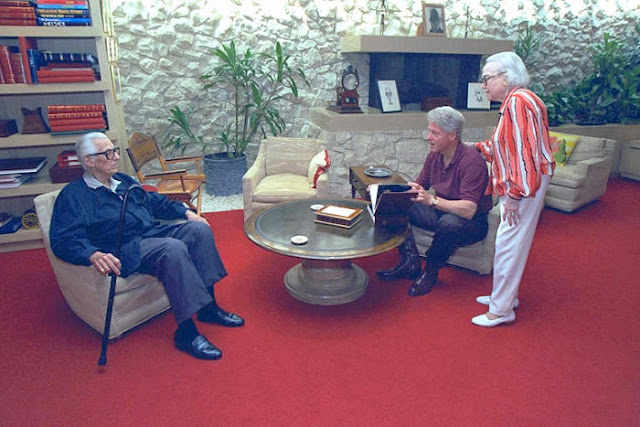 On September 29, 1995, Wasserman was presented with the Presidential Medal of Freedom by President Bill Clinton. In 1996, he was inducted into the Television Hall of Fame.[4] 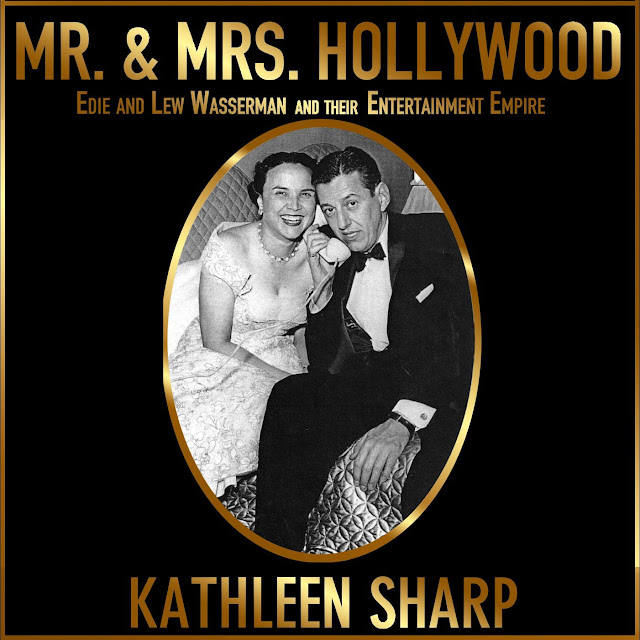 Wasserman was married to Edith "Edie" Beckerman who was also Jewish.[6] They had one child, a daughter, Lynne Kay Wasserman.[7] Lynne married MCA agent Ron Leif with whom she had a daughter, Carol Ann Leif; they later divorced.[8] In 1970, Lynne married stockbroker Jack Meyrowitz. They changed their name to Myers and had a son Casey Wasserman. This marriage also ended in divorce.[8] 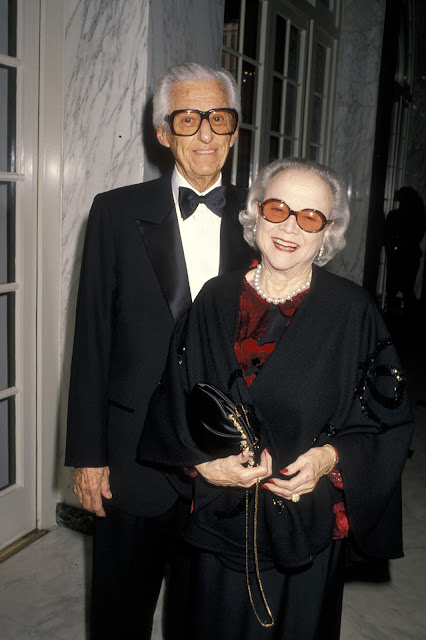 Lew Wasserman's grandson, Casey Wasserman, carries on the family name in the agency business, the Wasserman Media Group (WMG), which he started in 1998. He is also acting President and Chief Executive Officer of the Wasserman Foundation, a charitable organization founded by the Wassermans in 1952 in Beverly Hills.[9] Wasserman's granddaughter, Carol Ann Leif, is a stand-up comedian.[9] 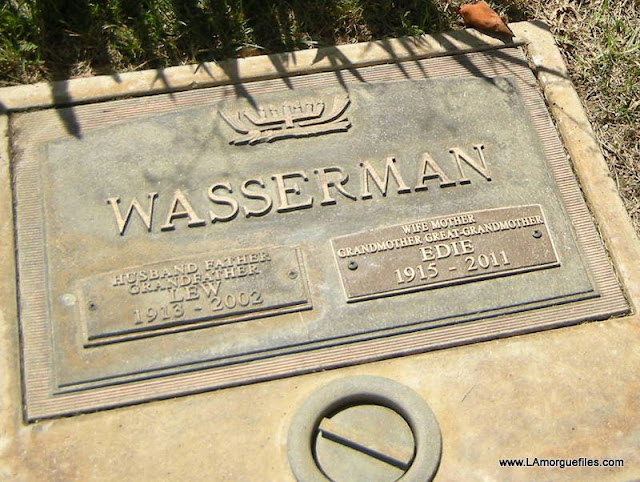 Wasserman died of complications from a stroke in Beverly Hills in 2002 and was interred in Hillside Memorial Park in Culver City.[5] He was honored posthumously with the 2,349th star on the Hollywood Walk of Fame on October 5, 2007. Wasserman's widow, Edie, died on August 18, 2011, at the age of 95,[10][11][12] and is buried with him in the Wasserman family plot at Hillside Memorial Park in Culver City, California.[13] 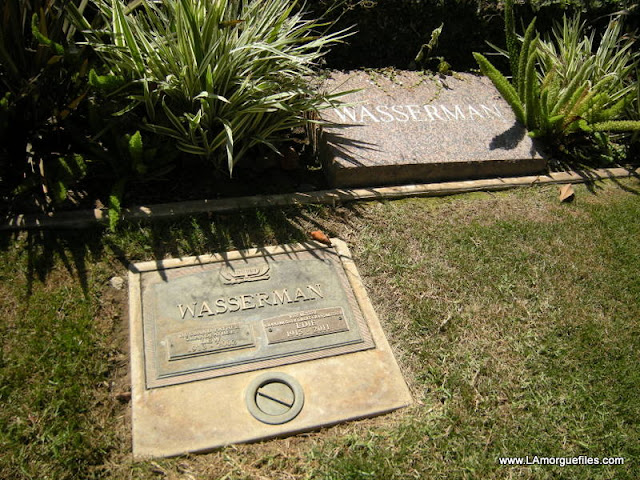 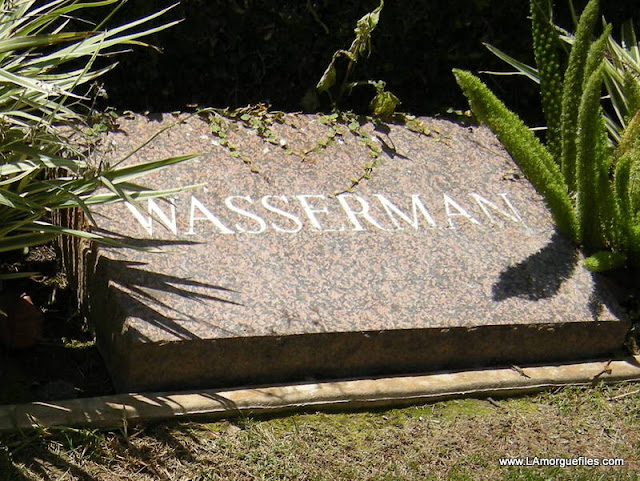 Wasserman was portrayed by Stewart Bick in the 2003 TV film The Reagans, by David Eisner in the 2002 CBS film Martin and Lewis, and by Michael Stuhlbarg in Hitchcock (2012). Wasserman was also he subject of a biography film entitled The Last Mogul in 2005 by director Barry Avrich. 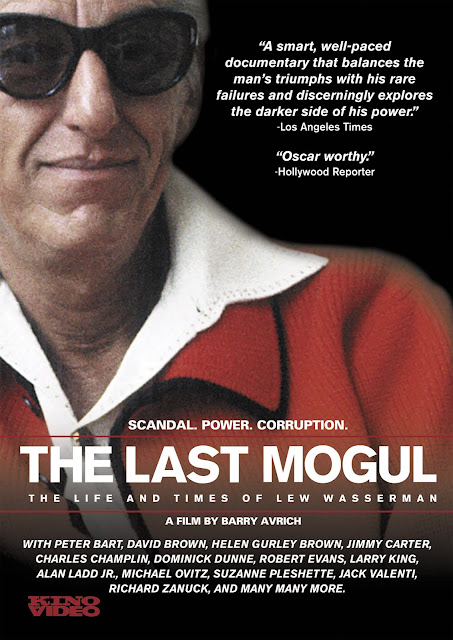 As a tribute to the man who essentially built the park, the New York section of Universal Studios Florida possesses a statue of Wasserman with accompanying plaque within the New York section of the park. It is routinely decorated for various events, such as Halloween Horror Nights; it is removed for the Macy's Holiday Parade, as to not interfere with the various balloons. 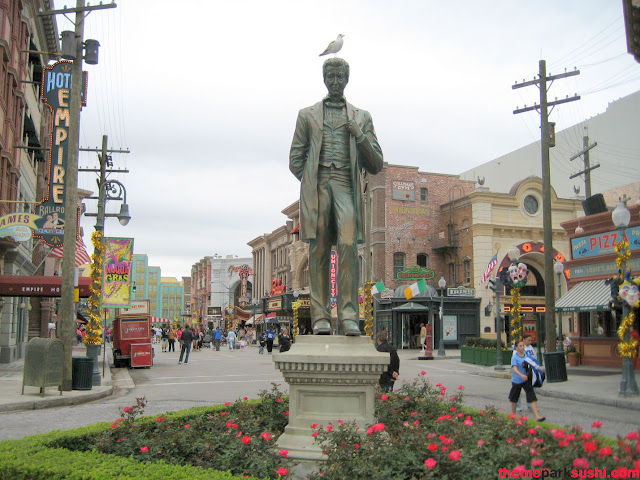 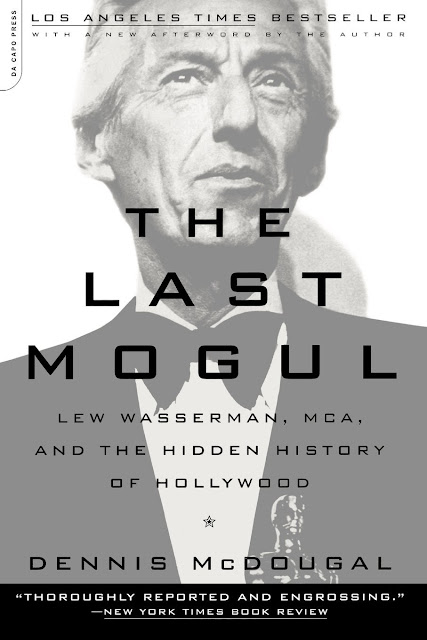 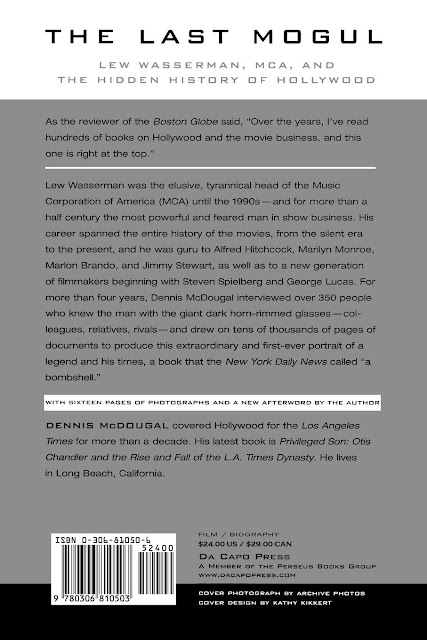