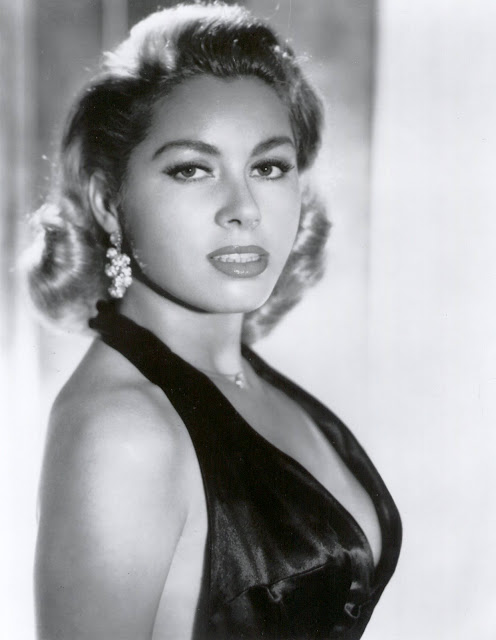 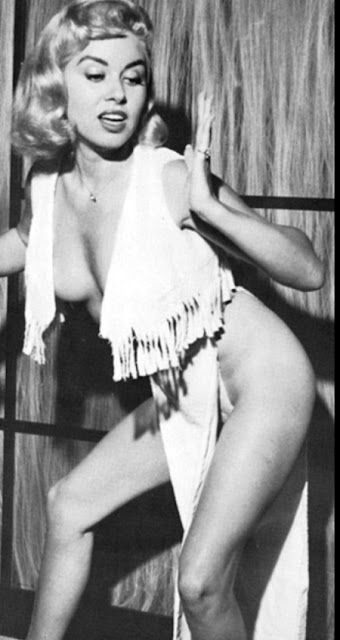 Jeanne Laverne Carmen was born in Paragould, Arkansas. As a child she picked cotton before running away from home at age 13. As a teen, she moved to New York City and landed a job as a dancer in Burlesque, with Bert Lahr. Later she became a model, appearing in several men's magazines. She also became a trick golfer, appearing with Jack Redmond.[2][3] 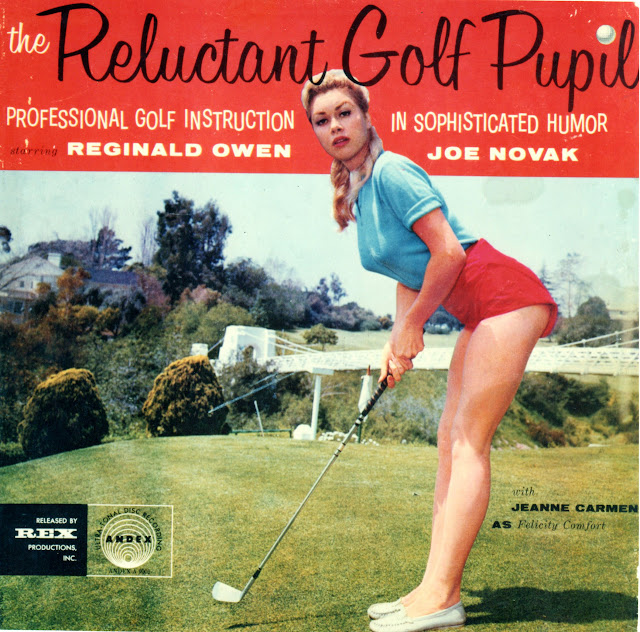 While in her 20s, she came to Hollywood and appeared in B movies such as 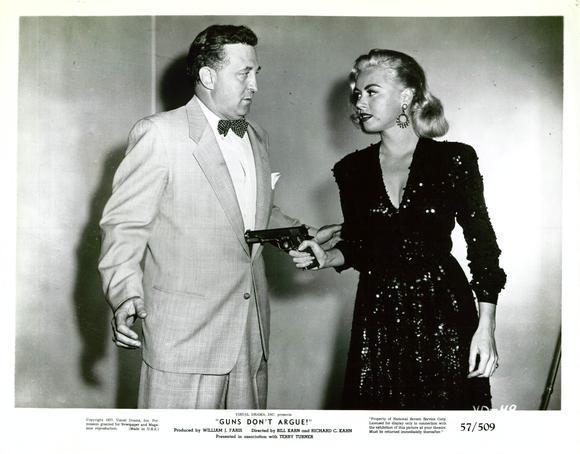 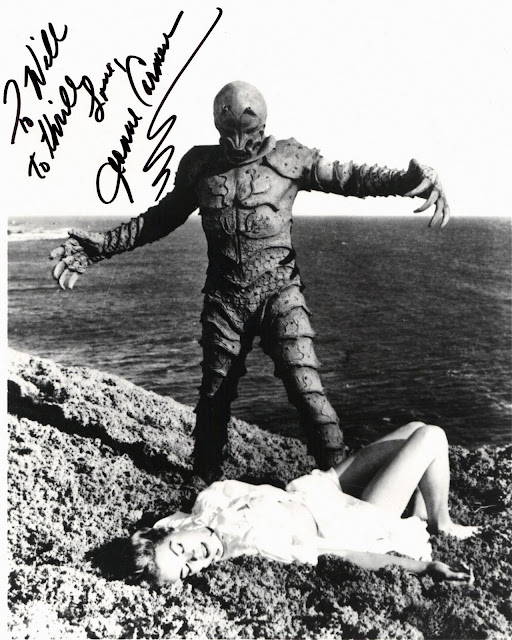 and The Monster of Piedras Blancas.

She played both brassy platinum-blondes and (with her natural dark hair) sultry Spanish women.[4] Carmen's smouldering good looks, hourglass figure, and striking green eyes quickly landed her on the big screen in 1956 playing a feisty Spanish senorita named "Serelda" in 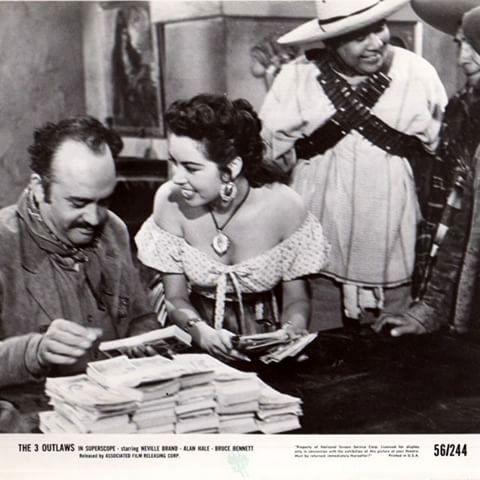 The Three Outlaws, a Western based on the same events as the later Butch Cassidy and the Sundance Kid, and co-starring Neville Brand and Alan Hale, Jr as Butch and Sundance. 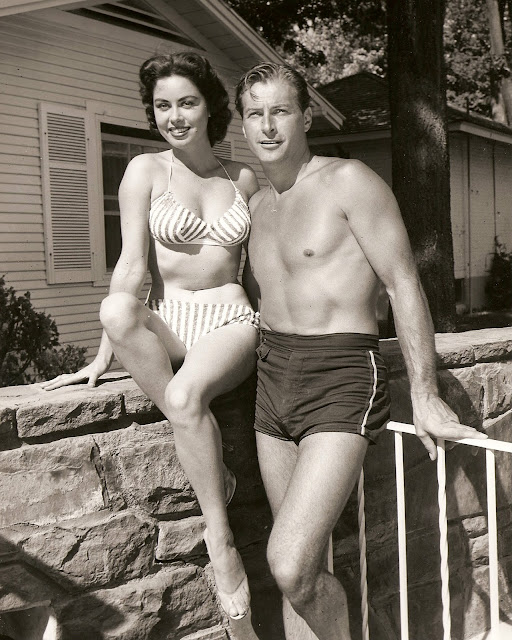 She was then cast by producer/director Howard W. Koch as an Indian girl in War Drums alongside Lex Barker of Tarzan fame. Koch took a liking to Carmen and cast her in his next film for Warner Bros, the teenage rock 'n' roll juvenile delinquent themed Untamed Youth (1957), co-starring Rockabilly legend Eddie Cochran, which inspired Cochran to cover the song "Jeannie, Jeannie, Jeannie" for her.[5][6] 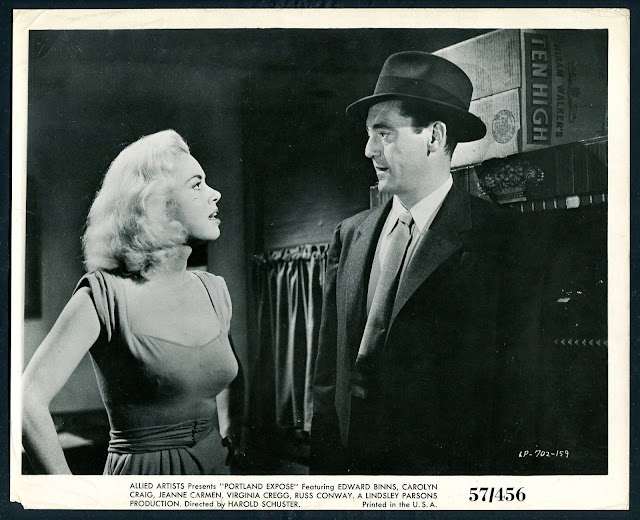 Carmen also appeared as a femme fatale in Portland Exposé alongside Frank Gorshin who later gained fame as the "Riddler" on the Batman series.[5] She also appeared in the Three Stooges short subject A Merry Mix Up playing Joe Besser's girlfriend "Mary." The short is notable for the Stooges playing three sets of identical triplets.[7] 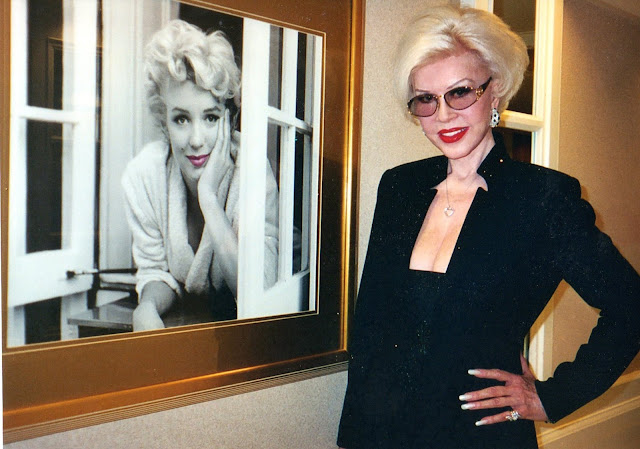 In 1998, Carmen was the subject of a TV biography titled "Jeanne Carmen: Queen of the B-Movies," on the series E! True Hollywood Story. The show stated that Carmen maintained a "dangerously close friendship with Marilyn Monroe and The Kennedys" and that after the death of Monroe, Carmen was told to leave town by Chicago mobster Johnny Rosselli who was working for Chicago Mob Boss Sam Giancana. Carmen, believing her life was in danger, fled to Scottsdale, Arizona, where she lived incognito for more than a decade. Carmen abandoned her platinum blonde locks, had three children and lived a quiet life, never mentioning her prior life in Hollywood.[8] 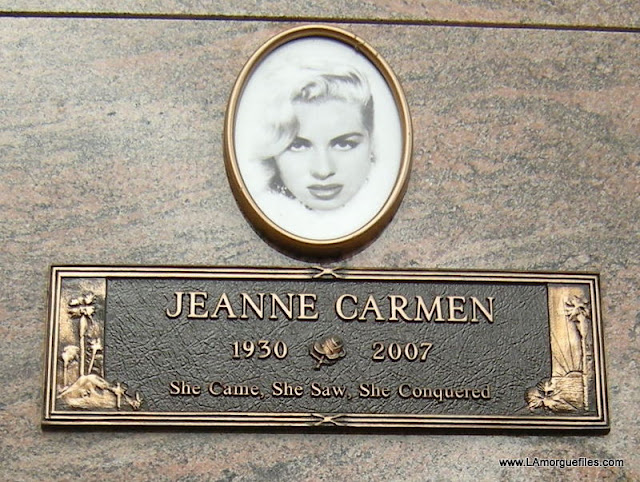 On December 20, 2007, aged 77, Jeanne Carmen died from lymphoma at her home in Orange County, California, where she had resided since 1978.[10][11] Jeanne Carmen is buried at Pacific View Memorial Park in Corona Del Mar in California. Her headstone contains the epitaph: "She Came, She Saw, She Conquered." She was survived by three children, Melinda, Kellee Jade, and Brandon, and three grandchildren. 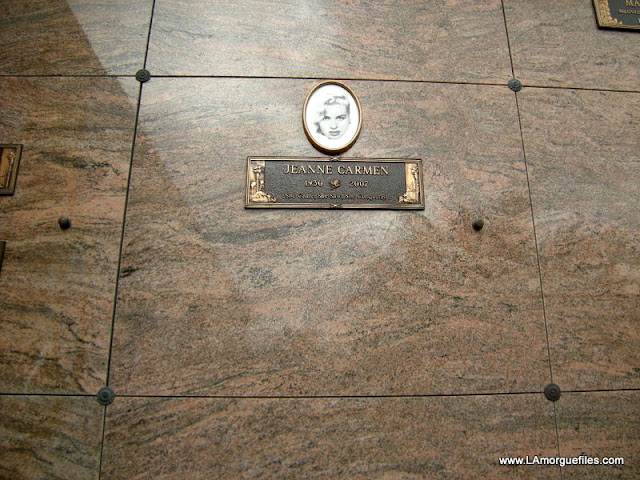 At the time of Carmen's death, a biographical film of her life was in early stages of development, with Christina Aguilera, Scarlett Johansson, and Kate Bosworth under consideration to play Carmen.[12] 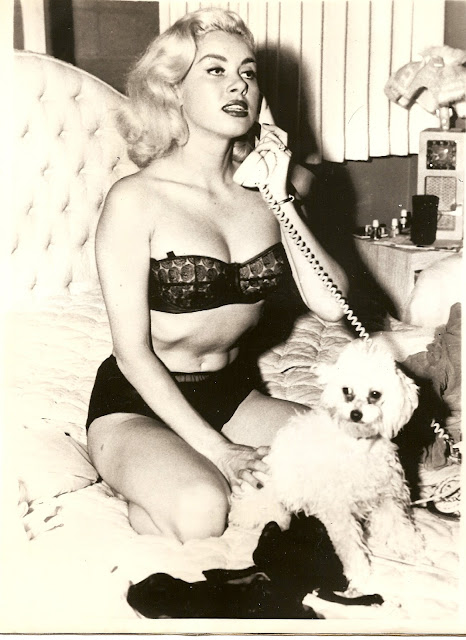 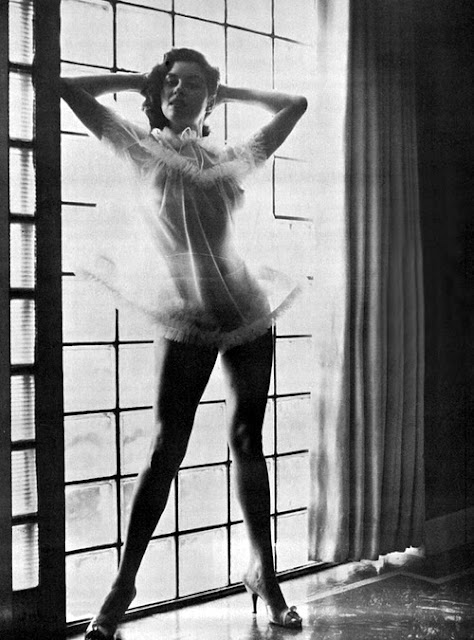